People often think of cannabis and alcohol as natural opposites – one making people outgoing, while the other makes them more relaxed. However, when used correctly together, they can actually complement eachother quite well. This technique is called crossfading and can create a powerful buzz if done right. However, be careful not to overdo it.

Chalk and cheese: Bud and booze are like chalk and pasta. The two things have dramatically different effects, to the point that they frequently divide people into opposing groups of enthusiasts; absolutists who enjoy one but despise the other. Those that enjoy marijuana value the contemplative benefits of smoking or consuming it in a quiet environment, whereas drinkers favor the confidence-boosting effects of beer, wine, and hard liquor, which are best enjoyed in a lively bar or pub.

While many people choose between alcohol and herbe, some use both concurrently. They may enjoy the best of both worlds if they can master crossfading without experiencing negative side-effects such as blackouts or vomiting.

Below, you’ll learn everything there is to know about getting drunk and high at the same time. Learn how alcohol enhances the effects of cannabis, in which order to take both substances, and how to deal with a negative reaction to this contentious combination.

Crossfading occurs when multiple substances are taken simultaneously and produce overlapping effects. Although it can refer to other drugs, it’s mostly used in relation to cannabis and alcohol. There’s a strong possibility you’ve been in this state of consciousness before or know someone who has.

But why would somebody choose to crossfade? Aren’t the isolated effects of weed and booze enough already? Well, as you may know, crossfading requires a delicate approach. If you go overboard with either substance, even slightly, it’ll put an end to your night immediately.

A study conducted in 2018 and published in the journal Cannabis asked 807 young adults aged 18-23 about their opinions on and experiences with crossfading. Although this number is small relative to those who partake, it provides us with valuable insights nonetheless.

Overall, just 43% of respondents associated the term “crossfading” solely with alcohol and marijuana. On top of that, 60% of them had no interest in getting crossfaded, and 5% had a high desire to try it. The practice was also seen as something that should be avoided; 33 percent regarded being crossfaded as quite dangerous, while only 5% saw it as a low-risk method of obtaining intoxication. 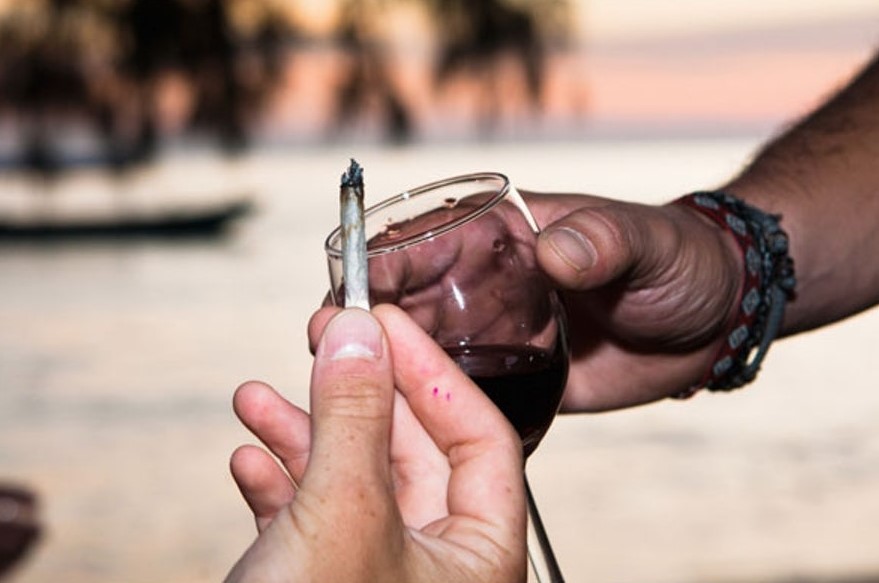 The Science Behind Crossfading

It’s no secret that mixing pints with bong hits or vodka shots with vaping is tough. But why do crossfades go so horribly wrong so often? What causes alcohol and marijuana to appear to be such an antipathy? Fortunately, scientists at the American Association for Clinical Chemistry spent the time to investigate.

The researchers wanted to investigate the interaction between alcohol and marijuana, motivated by findings that show the two are frequently detected together in motor vehicle accidents. According to their data, boozing while vaping significantly boosts THC and 11-hydroxy-THC levels in the blood. 11-hydroxy-THC is a more powerful version of delta-9-THC, making it easier for it to intoxicate people.

The scientists recruited 19 healthy adults who received either a placebo or minimal alcohol doses before vaping 500mg of placebo, low-strength cannabis, or high-strength cannabis. The presence of alcohol raised blood THC and 11-hydroxy-THC levels in the study participants.

The study found that “high-strength” cannabis had a THC content of 6.7%. However, most cultivars today have over three times this amount. If you mix alcohol into the equation, it’s easy to see why people often get into trouble when using both substances at the same time.

But just because some people have had a terrible (and even hazardous) experience does not mean that you can’t use alcohol and marijuana together. Crossfading gives a buzz that neither substance alone may achieve. The sensation will get you in the mood for socializing, and it’s useful in a party situation. You’ll learn how to crossfade effectively without wasting your time in the toilet bowl below.

If you want to crossfade successfully, you’ll need to think about your strategy, prepare ahead of time, and establish limits for yourself. When individuals crossfade when they are already intoxicated enough to make an informed decision regarding dosage and pacing, they frequently suffer from unpleasant side effects.

If you’re aware of what you’re getting yourself into before jumping in, the consequences will be reduced. You should choose which order to take the two substances after giving yourself a pep talk about being cautious and not going crazy. You have two alternatives: drink first or smoke first. Let’s look at both options in further depth.

Drinking before smoking will significantly intensify the effects of THC and its metabolites. So, if you decide to drink first, take things one hit at a time. Wait several minutes in between hits and stop as soon as you feel the desired effects. Also, do not get too drunk before smoking or else you’ll throw up your dinner later that night from getting overconfident and making poor decisions..

The researchers discovered that cannabis lowers ethanol’s bioavailability and delays the time it takes to act. While this might help you avoid feeling crossfaded too soon, it makes it simple to keep drinking without realizing how intoxicated you are until it’s too late. If you want to get stoned before you drink, take things slow and allow the first glass to settle before pouring another. 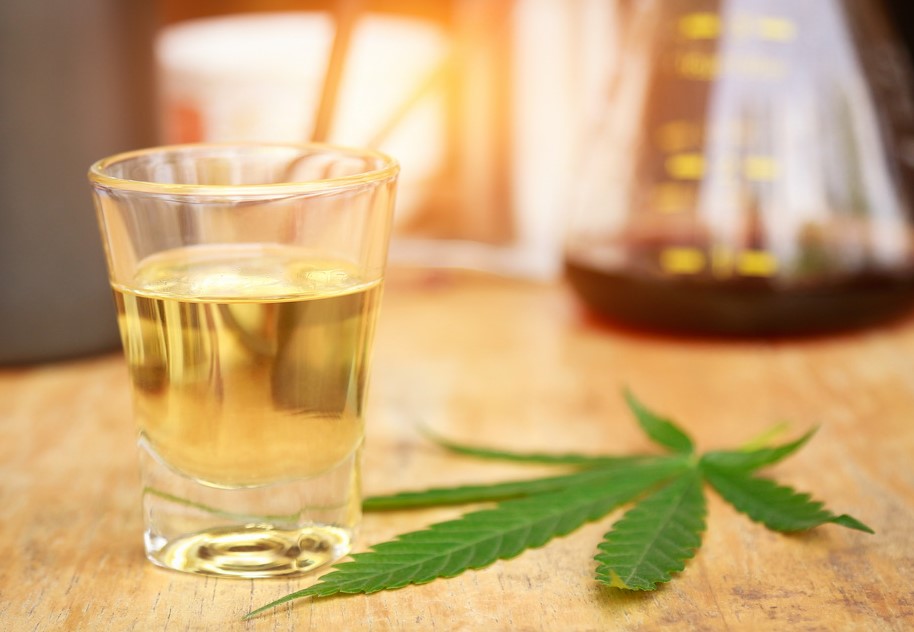 Can You Crossfade With Edibles?

This is more a question of “should you?” rather than “could you?”. Of course, you are free to do anything you want. But if you down a few beers after eating an edible, expect some trouble. First, cannabis consumption causes the liver to transform THC into 11-hydroxy-THC, which is roughly 23 times stronger than delta-9-THC.

Edibles can take a while for the effects to set in, but when they do, the high is much more potent than from smoking weed. If you add alcohol into the mix, it will increase circulating levels of 11-hydroxy-THC in your system, making the experience even more intense.

Since ingesting edibles can result in side effects like nausea and anxiety, mixing cannabis with alcohol is not recommended. Not only will drinking alcoholic beverages most likely intensify feelings of panic, but it certainly won’t do anything to help if you’re already feeling nauseous.

What Booze To Choose?

While the type of alcohol you drink while crossfading doesn’t have a large impact, it is important to be aware of how much you’re consuming. Picking your beverages more carefully will make the experience more enjoyable; it all comes down to personal taste. If you like beer, trying selecting a terpene-packed IPA to go with your herb. Or, if wine is more your style, have a chilled white wine along with some ice-chilled bong hits. Just remember that less strong liquor (spirits) is needed compared to drinking several beers.

How To Handle a Bad Reaction to Crossfading

Crossfading can be a lot of fun when done correctly. However, if you don’t strike a balance, you may get a negative response. The indicators that you’ve gone too far are similar to those of a greenout, with the added discomfort of alcohol’s side effects. You might feel:

So, what should you do if this happens? You’ll make matters far worse by giving in to panic if you don’t. Inhale deeply—the kind that makes your belly inflate —through your nose, hold for a few seconds, and then slowly exhale.

Next, find somewhere comfortable. Get away from the chaos and noise of the party or gathering and find a spot to lay down until these feelings pass. If you feel particularly sick and sleepy, ask a close friend to watch over you for a while to avoid any chance of asphyxiation. You should also aim to dilute your blood by drinking plenty of water, and raise your blood sugar by tucking into some snacks when you can handle them. 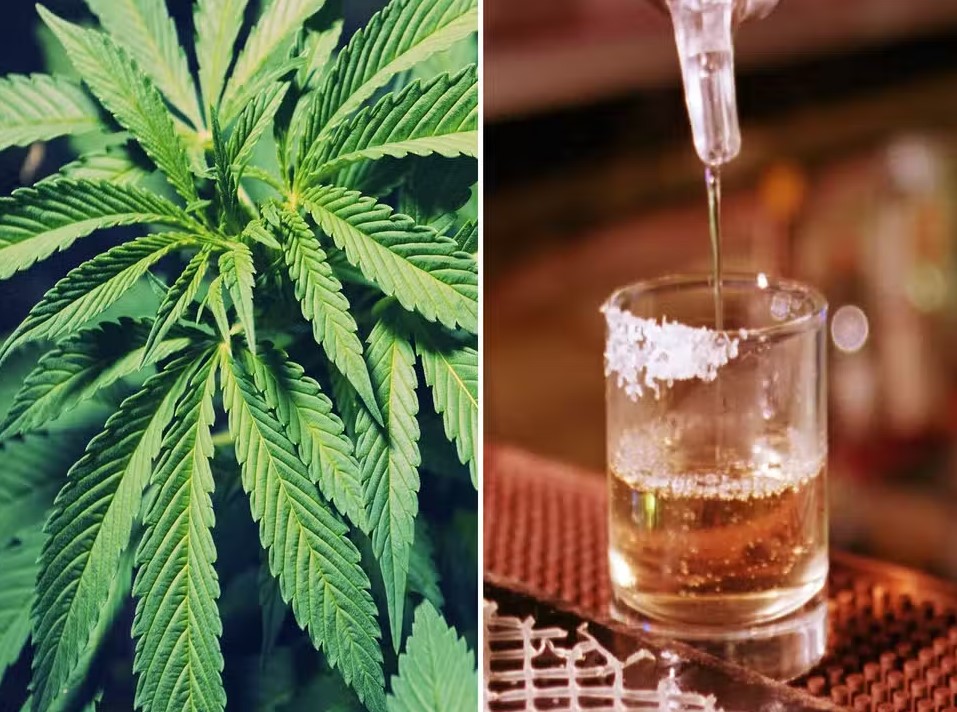 Crossfading fails more than it should. We all get caught up in social gatherings such as parties. However, if you’re going to crossfade, keep in mind that moderation is necessary not just for the sake of taste, but also to avoid ruining an enjoyable experience.

Start your night by setting a low limit for how much you will drink or smoke; it’s better to feel slightly buzzed than sick to your stomach. You should also crossfade with a friend–someone who won’t let you get too carried away and vice versa.