“Hey HMJ, what’s the difference between shatter and wax?” We receive that question at least twenty times a day in person, by phone, email, fax (yes, fax), text message, IM, and any other type of conventional or electronic communication imaginable. For now, we’re waiting for the inquiry to come through psychic waves. After that is when our existence will be perfect.

The term “shatter” has been so overused that it recently topped our list of most-often asked questions (just above the long-time king, “Who are the Grateful Dead and why am I following them?”). To respond to that question—shatter vs. wax, not Jerry Garcia’s omnipresence—we’ve compiled this text comparing cannabis concentrates to explain their differences.

However, before we can explore the current discussion, we need to briefly cover the history of marijuana and how it has morphed into various forms over time. Then, let’s focus on smoking specifically.

Marijuana smoking has been around since ancient times. It’s a tried-and-true approach that most likely began shortly after the caveman discovered he could produce fire.

In fact, after eating some prehistoric cannabis, I wouldn’t be surprised if a mile-high caveman came up with the wheel (we’ve all had those moments of “genius,” haven’t we?) because he wanted to make his munchies faster. But what about using marijuana?

Although we cannot be positive, it is speculated that marijuana was originally discovered by being ingested like food (oregano?). What we do know for certain however, is that cannabis was already in use in China between 10,000 and 2,000 B.C.

Ancient Chinese rulers likely prized cannabis leaves for their psychoactive and healing qualities. Herbe tea, in particular, has been and continues to be a popular cannabis food in many eastern and southeast Asian nations.

Weed tea never caught on in the United States, but we did perfect pot brownies in the early 20th century. You’re welcome!

The two most popular methods of consuming marijuana have always been smoking and ingestion. However, dabbing is now starting to become more and more popular. Dabbing is when we first encounter the questions surrounding shatter vs. wax. But before discussing that in depth, let’s explore what exactly dabbing entails.

Dabbing involves heating butane hash oil, commonly known as BHO (for short), with a special device (also called an oil rig), and then breathing in the resulting vapor. So, yeah, you could say it’s similar to smoking since a Boeing 747 is comparable to the Wright Brothers’ first airplane. Sure, they fly; however, the parallels end there.

Dabbing gets its name from the small amount of oil used on a marijuana rig to produce high levels of THC. Although dabbing is controversial because it uses butane hash oil, many people enjoy it for its potency.

BHO is a type of cannabis concentrate that can have an exceptional potency when compared to the plant you smoke. Here’s how it works:

That is a significant variation! Concentrates are three to four times more powerful than traditional buds smoked or ingested. Consider how high you got while smoking your favorite Girl Scout Cookie souche last time.

If you split the 1.5 grams of bud into 10 tiny portions and each portion is diluted with 0.25 mL of water, then calculate the effect on THC potency (at 20 percent CBD), it’s easy to see why such a significant difference in strength might be bothersome. In fact, because just a little dab’ll do the trick, this new method was dubbed dabbing…because four times as much THC means four times the fun!

We mentioned that butane hash oil is a concentrated product with a strong punch. But what exactly are concentrates and how do they achieve such potency? In the following section, we’ll address this issue.

Let’s dig deeper into what concentrates are after we’ve discussed the procedure of dabbing. If you weren’t aware, a concentrate is simply a concentrated form of regular marijuana bud.

Solvent extraction is a technique used to remove the trichomes and other chemical components of cannabis that give it its psychedelic and healing properties. There are only the cannabinoids (THC, CBD, CBN, etc.), terpenes, and flavonoids after everything is said and done. This is when dabbing becomes relevant.

Although a variety of solvents, such as isopropyl alcohol, chloroform, and carbon dioxide, are sometimes used in extractions, butane is the most frequent.

Butane hash oil, or BHO for short, is the product you get after using butane. The two forms mentioned in the title–shatter and wax– will be explored further down. 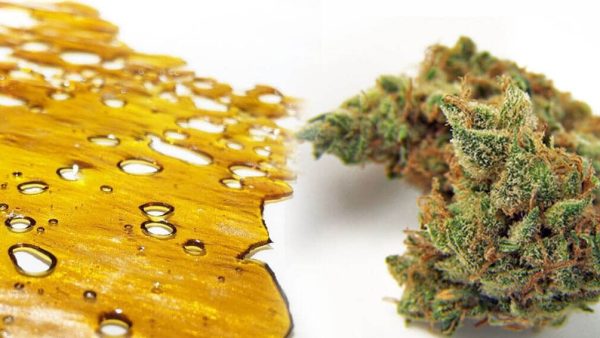 Shatter is a pale yellowish liquid that resembles rock candy or Jolly Ranchers. It’s produced by forcing butane through cannabis plant material to produce an amber liquid like other butane concentrates.

After cooled, this amber liquid hardens into shatter. In terms of consistency, shatter is often likened to thin peanut brittle.

Theclear appearance of shatteris because of the temperatures used during its extraction and finishing process (as well as other conditions), which can only be fully understood by those with a background in chemistry.

The easiest way to think of it- the molecules in BHO are like Lego blocks. In shatter form, they’re all concisely stacked on one another similar to a wall. Since the molecular alignment allows light to pass through; this gives shatter its brittle texture. 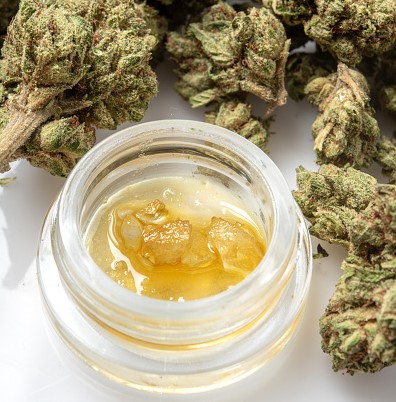 Wax, like shatter, is a type of BHO concentrate. It has the consistency of coconut oil and resembles ear wax in appearance. Both wax and shatter are made from the amber liquid that results from butane extraction.

The oil is either heated or agitated to produce a material that can be opaque and have a peanut butter-like, ear wax-like, or honeycomb consistency.

Returning to the Lego block example, while the blocks in shatter are all lined up (like a wall), the blocks in wax are chaotic and unorganized (as if you just dumped them out into a pile).

The wax is solid and opaque, with a texture like coconut oil, as a result of the disarrayed bricks. Yes, both of these descriptions are overly-simplified–I wouldn’t advise it on an exam–but they can be useful in visualizing what goes on at the molecular level.

So What’s The Difference?

The main difference between shatter and wax is their appearance. The way the concentrate was made dictates its look, rather than anything else. Both shatter and wax are BHO concentrates with a similar THC concentration that offer a potent, long-lasting high. They’re both used in dabbing

That said, some use and storage differences need to be considered:

How Do You Use Shatter And Wax?

Shatter and wax are both dabbed in a dabbing rig, which is similar to a bong but has a bowl that fits a nail designed for dabs rather than marijuana.

The object in the top corner of the image is a dabbing nail. If you’re interested in trying it, use a small scoop or bits of wax with your dab tool. To light your blow torch (which works better than matches), hold it near the nail until it becomes hot.

It’s time to breathe in after the smoking device is set up. Dab rigs provide bigger hits than other methods like joints, blunts, Thai sticks, and vaporizers because they use higher amounts of concentrates.

dabbing is superior to other methods of consuming cannabis because you only inhale the concentrate, rather than molecules of plant matter and impurities.

The cannabinoids, terpenes, flavonoids, and crystals are what give marijuana its psychedelic qualities. 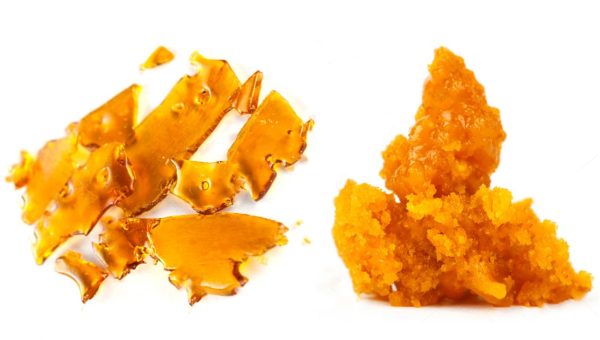 Which Do You Choose: Shatter vs Wax?

The best way to understand which method is better – shatter or wax – is by trying them both for yourself. I mean, it’s marijuana we’re talking about here; how could you possibly choose wrong? This also gives you a chance to try out more strains of your favorite plant (we can’t even say smoke now, right?).

It’s a scientific experiment with your daughter, so call it an investigation. “Leave me alone, Ma! I’m conducting science… By the way, do we have any Twinkies?” Perhaps you could obtain financing for anything like that (without the Twinkies, of course)?

Concentrates (such as shatter and wax) can enhance the flavor of your marijuana choices in a number of ways, whether you buy or produce it yourself. Yeah, you’ll need some specialized equipment and knowledge to operate it properly, but it’s all part of the fun.