To help support our site, we may earn commissions when readers click links to our affiliate partners’ websites. We only promote brands that we trust and feel meet the highest quality standards. For more information, please read our full disclaimer.

Marijuana smokers have a hard time finding new ways to get high. For years, most cannabis users had no other choice but to smoke from a joint, blunt, or bowl. Some people tried edibles on occasion, but usually they prefer the act of smoking marijuana.

Along came dabbing and vaping, which revolutionized the game entirely. Both alternatives enable you to vaporize cannabis concentrates as well as smoke marijuana flower. Concentrates are high in THC and can reach up to 90 percent concentration.

Both new alternatives have generated a debate about which is superior. This piece compares dabbing and vaping to help you decide which one is preferable. To make things simple, we’re talking about using a vapor pen or dab rig for concentrates rather than actual cannabis flowers.

What are Dabbing and Vaping?

It’s okay if you can’t keep up with all the cannabis jargon. The field is constantly evolving and there’s a lot of new terminology to learn. Just remember that dabbing is a form of vaporizing – both methods involve inhaling cannabis extracts in the form of vapor.

Dabbing refers to using a dab rig to turn marijuana concentrates into vapor, while vaping typically means using a vaporizer with store-bought e-liquids or juices.

Vape pens don’t burn the materials. Instead, they heat it to a temperature below combustion to produce vapor, which you inhale. Some people say that it’s healthier than smoking because there are no carcinogens produced. Furthermore, inhaling vapor might be less irritating to your nose and lungs. Also, vape pens won’t leave behind a pungent odor that lingers for a while after use.

tamponner does expose the material to higher temperatures than vaping, ultimately combusting it.

What Is the Difference Between a Vape and a Dab Pen?

Oftentimes, people believe that dabbing and vaping are one in the same. In reality, there is a world of difference between the two–specifically when it comes to heating mechanisms. With a dab rig (which looks like a bong but with a nail instead of bowl), the user heats up a titanium (or quartz or ceramic) nail before applying their wax concentrate. They then inhale the resultant vapor through the mouthpiece attached to  the rig.

The electric heating coil in a vape pen heats the air surrounding the chamber instead of directly heating the oil. When the temperature is high enough, active cannabinoids (THC, CBD) and terpenes leave the oil and become vapors floating in the air inside chamber. This creates a purer vapor to inhale.

In general, a vape pen remains more convenient and portable. It is possible to place one in your pocket and bring it with you. While you could try and transport a dab rig, it isn’t going to fit in your pocket! However, advances in dabbing mean there are options on the market that perhaps allow for greater portability.

Users with lots of expertise claim that a dab rig delivers more THC per hit than a vape pen.

Also, experienced users suggest they get more THC per hit with a dab rig than a vape pen. This is because many vaporizers provide carefully measured doses per hit. Dabbing tends to offer a ‘freer’ experience with a greater level of cannabinoids consumed.

Yet vaping offers a greater degree of temperature control since vape pens usually have temperature settings. This can make a big difference to the flavor and vapor produced, depending on the type of concentrate.

If you use either a vape or a dab, it is beneficial to know what changes the plant material goes through when heated. Although, your research can be limited to just convective and conductive heating methods.

It is typical for dab rigs to use this form of heating. Conduction involves applying a heat source directly to the material. This makes sense when heating a cannabis concentrate because of its efficiency. However, it also exposes the material to significantly higher temperatures than vaping.

Vape pens use this type of heating. Convection uses hot air to vaporize the plant material. When the air reaches a specific temperature, it heats the concentrate, thus extracting the cannabinoids. This process also turns the material into a vapor without ever threatening combustion.

A growing number of pens now use ceramic coils to ensure there isn’t any direct contact. This process ensures the oil isn’t combusted and also prevents harmful chemicals from being released.

Is Dabbing Healthier Than Vaping?

What is the healthiest way to utilize cannabis? You have individuals on both sides of the fence claiming that their preferred technique is safer when it comes to vaping vs. dabbing. In general, both options are thought to be healthier than smoking marijuana.

In reality, the actual technique of vaping is probably healthier than dabbing. This is because it presents less of a chance of inhaling a charred substance.

The process of dabbing uses incredibly high temperatures. Therefore, even if you’re extremely careful, you’ll probably combust some of the concentrate and inhale it along with the vapor. When you vape, you ‘should’ only inhale the active cannabinoids extracted from the carrier oil.

However, you should take this information with a grain of salt. Vaping is considerably safer than dabbing in terms of health. However, the e-liquid you vape might be much more harmful than dabbing concentrates like wax or shatter because to how it’s produced.

Other than that, many individuals are not aware that specialized types of cannabis extracts also exist. For example, perfect viscosity is required for the vaporization of cannabis e-liquids and vape juices. This implies the products must have a more liquid texture than pure cannabis concentrates. If you’ve ever tried making BHO wax, you’ll know it’s thick and sticky rather than “clean” like oils.

Turning the natural concentrate into a liquid suitable for vaping involves cutting it with carrier oils. Manufacturers even use toxic thinning agents such as propylene glycol and ethylene oxide, which are known carcinogens. Is it better to inhale charred plant matter from time to time rather than vaporized carcinogens? Both methods certainly have their health concerns.

One issue to note is what happens when you heat cannabis concentrates or flower to a high temperature. Dabbing automatically exposes the material to extreme heat. However, some people turn their vaporizer’s temperature setting way too high. Increasing the heat to a certain level increases the risk of benzene production.

This toxin is found in cigarettes, automobile exhaust fumes, and even soft drinks! Unless you overcook it, cannabis usually produces low levels of benzene. When marijuana is heated beyond 365 degrees Fahrenheit, benzene is produced according to a study published in 1986. If you have a vaporizer, you can keep the temperature below that level. You’ll be difficult to stop with a dab rig regardless. 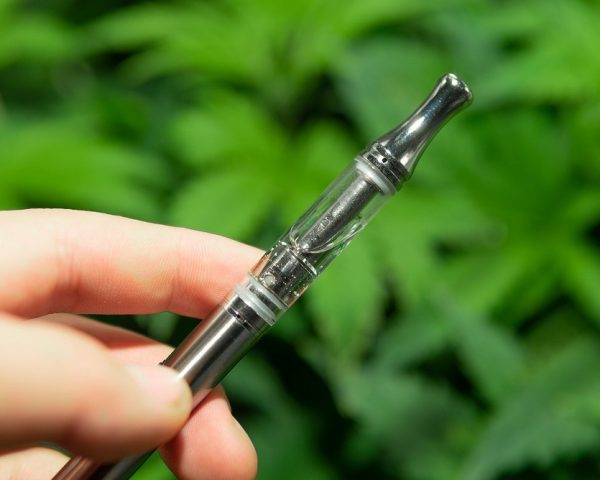 Vaping vs. Dabbing: A Question of Potency

For experienced users, the big vaping vs. dabbing question is whether one is more potent than the other. Whether you inhale vapor or smoke, the high is likely to hit hard and fast. One can argue that the higher temperatures achieved by dabbing release even more cannabinoids than with vaping. However, it boils down to how much you can consume in a certain period.

Is Dabbing More Potent Than Vaping?

The THC content is the primary concern when determining the potency of the product. Typically, both dabbing concentrates and marijuana e-liquids are more potent than smoking raw flower buds.

For example, most high-quality dab concentrates will have a THC content of anywhere between 60% and 90%. This is far more potent than regular marijuana strains, which generally top out at about 25-30% THC.

Similarly, you can buy e-liquids with THC concentrations of between 15% and 90%. It is a lot easier to control your high with vape liquids. This is because you can choose to take small hits at a time with your vape pen.

There are a growing number of hospitalizations from dabbing and vaping extremely potent cannabis concentrates.

With dabbing, on the other hand, the whole idea is to inhale an entire dab at one time. The process involves dabbing the concentrate on the red-hot nail and inhaling until the vapor is gone.

With that in mind, dabbing is traditionally much more potent than vaping, at least when done in “normal amounts.” However, if you vape an entire cartridge full of 90% THC e-liquid, you’ll experience an extremely uncomfortable level of intoxication.

The most important thing is to use either option sensibly. There are a growing number of hospitalizations from dabbing and vaping extremely potent cannabis concentrates. Experiencing the side effects of a THC “overdose” could turn you off marijuana altogether. 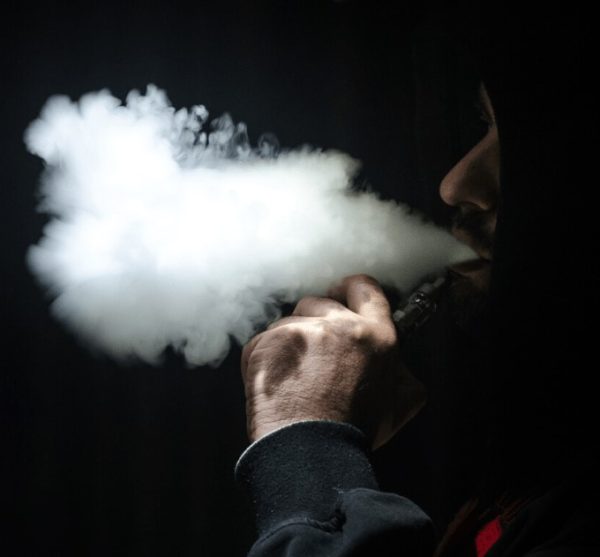 It’s safe to say that dabbing and vaping are the future of cannabis consumption. With more people than ever having access to high-quality cannabis, tolerance levels will inevitably rise. And as they do, individuals will increasingly favor and seek out the enhanced potency of both dabbing and vaping.

Also, both methods are becoming popular because of their perceived health benefits. The assumption is that inhaling vapor is better for us than smoking marijuana.

However, if you want to vape, you should do everything possible to ensure that your e-liquid is safe and produced responsibly. Many manufacturers use hazardous thinning agents in their products. Certainly, it is better to breathe a cloud of cannabis smoke than a cloud of poisonous vape juice chemicals, isn’t it?