Hemp and marijuana are both cannabis plants genetically, yet they have distinct characteristics. To discover not just what distinguishes hemp from marijuana, but also why it’s such a valuable and versatile commodity, we’ll go through the anatomy, history, usage, and legality of hemp.

With the continuing rise of CBD, hemp has become a hot topic. It has drawn a great deal of attention in both the health sectors and the legal sectors, with many states still yet to decide where they stand on this interesting plant.

Many people are unaware that hemp and cannabis are relatives. Despite their frequent mixing up, the two plants do have important differences.

Today, we look at the differences between these two cannabis subspecies to discover what makes them unique. 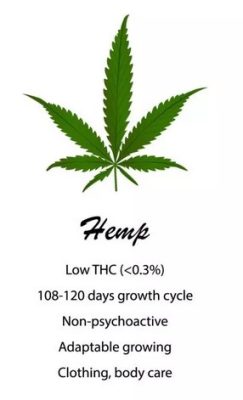 Hemp has grown in popularity lately, in part thanks to the widespread use of CBD. For decades, hemp was associated with marijuana, which is why it was prohibited. Hemp has now been decriminalized as a result of the 2018 Farm Bill, allowing it to be grown and harvested in the United States.

Hemp was formerly cultivated in the United States and was widely grown there. George Washington encouraged farmers to grow hemp as a cash crop, which they used to make cloth. He regularly kept track of his hemp harvests in his diary. Hemp production made up a significant portion of the US economy before the Civil War, providing raw products (including food, medicine, and textiles) for numerous sectors.

Hemp and marijuana are two different types of plants with varying chemical compositions. Hemp, unlike marijuana, contains very little THC, the chemical that creates marijuana’s psychotropic effects. As a result, hemp does not cause any cognitive impairment. It can, however, provide nutritional value and is used to make a variety of therapeutic items because to its high CBD level. 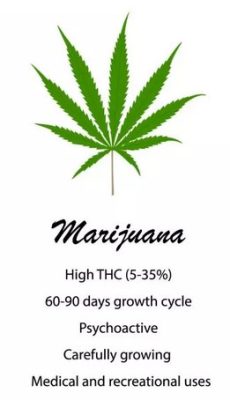 Marijuana is of course best known as a recreational drug. It has high amounts of delta-9-tetrahydrocannabinol (THC), making it excellent for producing an intoxicating effect.

Marijuana is available in a variety of forms and hundreds of unique strains, each with its own scent, flavor, and impact. Decades of crossbreeding have resulted in the development of distinct, one-of-a-kind hybrids.

The majority of American states now allow medical marijuana, implying that the plant has a number of therapeutic advantages.

Why are Hemp and Marijuana Different?

Despite the fact that most botanists regard all cannabis plants to be of the same species, they have frequently been divided into two types: Cannabis sativa and Cannabis indica.

The difference between indica and sativa has been around for quite a long time. This distinction is frequently utilized to distinguish different strains of marijuana because it has long been used as a basis for describing them. A sativa was defined as marijuana that was more energetic or uplifting, while an indica was characterized as herbe that was more soothing or sedative. In addition, these two types were said to differ in terms of their look.

Despite this classification’s continued popularity today, scientists have debunked it. The chemical makeup of a souche is what affects you and decides how it impacts you, not the labeling indica or sativa on the plant.

Surprisingly, a study comparing the genetic profiles of 43 hemp samples and 81 marijuana samples discovered a significant difference between hemp and marijuana. Hemp is genetically closer to C. indica than marijuana is to C. sativa.

Cannabis is, however, far less harmful than many other plants on the market today. This study also found that marijuana and hemp still share a “large pool of genetic diversity.” There are cannabis strains that are more genetically similar to hemp and vice versa. Thousands of years of human travel with cannabis seeds and deliberate breeding have contributed to this perplexing genetic mix.

Is the Hemp vs Marijuana Distinction Useful?

Now that you know the difference between hemp and marijuana, it’s time to look at it and see whether it works for customers. To begin, let’s go over the basic differences between popular cannabis goods.

The CBD oil that you can purchase in a marijuana shop is made only from the hemp plant. This substance is also known as hemp oil, CBD oil, or CBD hemp oil.

Cannabis oil is a form of cannabis-derived oil that has been extracted from the marijuana plant. These oils will usually include some amount of THC, CBD, and other healthful plant components. CBD oil may be made from marijuana because it too may contain CBD; however, to prevent confusion, most CBD-rich oils derived from marijuana are called cannabis oil or marijuana oil.

Can you Smoke Hemp?

Yes, hemp can put you in a euphoric state. Hemp, on the other hand, includes minute traces of intoxicating substances. THC is not created in sufficient amounts by hemp plants to have an intoxicating influence. Despite being a psychoactive cannabinoid in technical terms, CBD is non-intoxicating and does not create its own euphoric high.

Whether you’re looking to get high or not, smoking organic hemp may be a pleasant and efficient way to experience other cannabinoids like CBD. Now that you can purchase certified organic hemp flowers and pre-rolls from all across the world, experimenting has never been easier. Despite the fact that hemp-derived CBD gummies and CBD oil are popular right now, smoking hemp allows you to self-titrate in real time, so there’s no need for any particular effects to appear.

Smoking CBD rather than eating or using it via a tincture under your tongue has several benefits, including higher bioavailability and additional advantages. When you smoke CBD rather than eat or administer it with a tincture under your tongue, its bioavailability improves considerably. The amount of CBD in the smoke or vapor is greater when inhaled. A CBD edible goes through the digestive system, where part of its strength is lost as it passes through.

If you’re looking for a more clean burn, consider lighting your hemp flower with a hemp wick instead of a lighter or match. Raw hemp wick coated in beeswax produces a slow-burning all-natural product that many users claim creates a cleaner cannabis flavor than one fueled by gasoline or electricity. The more you know.

How are Hemp Varieties Chosen?

Hemp cultivars are selected based on numerous criteria, including:

Now that a wide range of cannabinoids and their many benefits are becoming better understood, cannabis producers are turning to hemp in order to produce CBD. In particular, CBD production has grown in significance in recent years. As the CBD market matures, additional cultivars are chosen based on their CBD yields and unique aromatic terpene profiles.

Hemp vs. Marijuana: Does Hemp also Have THC?

Hemp, unlike cannabis, is a non-THC containing plant that contains numerous cannabinoids. One of them is tetrahydrocannabinol (THC), the mind-altering cannabinoid present in marijuana. Hemp, on the other hand, does not have enough THC to cause intoxication.

Hemp only produces a trace amount of THC, but it is able to manufacture substantial quantities of this non-intoxicating cannabinoid cannabidiol (CBD) through the conversion process. Hemp-derived CBD is fast becoming one of the most widely used cannabinoids on the market today.

The amount of THC produced by the plant is one method that distinguishes hemp from marijuana throughout the world. In the United States, cannabis sativa L. with a THC concentration less than 0.3 percent is known as industrial hemp. The European Union limit is 0.2%, although it’s zero in the United States unless farmers have a license to produce cannabis with less than 0.2% THC.

Cannabis seeds, on the other hand, do not include any cannabinoids due to a lack of growing facilities. Cannabis flowers, leaves, and stalks, however, contain more cannabinoids. Cannabis flower is sought by users who want to benefit from cannabis’ medical uses because it may be smoked or refined into tinctures and edibles.

Cannabis strains high in THC can have effects, and they are utilized for medical purposes like pain management. Strains low in THC but rich in other cannabinoids, such as cannabidiol (CBD), may provide benefits without getting you high. Hemp, also known as cannabis with less than 0.3 percent THC concentration, may be cultivated to generate a variety of items including:

Hemp may be cultivated to produce a wide range of products, including paper and textiles, because it grows faster than trees and other crops. Hemp seed is high in protein and fiber and is therefore very nutritious.

The Cannabis sativa plant contains two distinct strains: hemp and marijuana. Aside from the THC concentration, there’s another distinction between hemp and marijuana: legality. In 2018, the Farm Bill authorized farmers to produce hemp, which has a 0.3 percent or less THC content, throughout the United States. It also legalized items derived from hemp seeds.

Cannabis, in which the THC concentration is above 0.3 percent, isn’t legal across the United States. State laws differ. It’s lawful to use it both therapeutically and recreationally in certain states. In certain jurisdictions, marijuana is still strictly illegal.

Cannabidiol (CBD) is a cannabinoid present in cannabis plants that has grown in popularity as hemp, which is a type of marijuana, has become legal throughout the United States. Many people consume CBD products because they are supposed to have various health advantages. Although CBD is present in all cannabis plants in trace amounts, it can be created from either hemp or marijuana. If they are produced from hemp and contain less than 0.3 percent THC, they are only legal if they meet the Farm Bill 2014 requirements.