Similar to other countries with restrictive drug laws, Canada’s original drug laws were based on discrimination and often times had a bigger impact on Indigenous, Black, Asian, Latinx and vulnerable communities.

Canada’s initial experiment with prohibition was largely due to the anti-Chinese racism that had become increasingly common in British Columbia during the construction of the Canadian Pacific Railway. This surge of Chinese immigrants moving to Vancouver lead to The Opium and Drug Act of 1908, making it illegal for Canadians to import or sell opiates and cocaine for non-medical purposes. However, this law specifically targeted Chinese Canadians which resulted in higher arrest rates and more severe legal penalties for them.

Emily Murphy’s book, The Black Candle, is a great example of the Canadian public’s view of race and drug use during that time. Her work helped to create the foundations of a social stigma around drug users that continues to this day.

Most importantly, it defined addiction as a legal issue instead of a public health concern. By publishing the book in 1922, Murphy inspired readers to demand stricter drug laws, which soon came into effect.

The1908 Act was the first of its kind, prohibition other drugs. This is when cannabis became a scheduled substance in 1923 under the legislation known as the Act to Prohibit the Improper Use of Opium and other Drugs. Unfortunately, there is no evidence that suggests this act was ever discussed or debated before Parliament members.

In 1929, The Opium and Narcotic Act was put into place with the intention of punishing those caught dealing or consuming illegal substances. This act would be the mainstay of Canadian drug policy for 40 following years. However, as the 1960s approached and recreational drugs became more popular among young people, legislation had to adapt. In 1961, The Narcotic Control Act was enacted which made possession of cannabis (among other drugs) a criminal offence carrying a sentence twice as long as before – increasing it from 7 to 14 years imprisonment.

The Act also followed the Single Convention on Narcotic Drugs, which Canada was a signatory of. This treaty would be updated with later legislation controlling activities related to psychotropic substances like MDMA and LSD. Regardless, amid continuous arrests of Canadians who had no other criminal records, the government launched the Le Dain Commission to further explore drug use. The commission suggestions were leaning more towards leniency when it came to punishment but nothing changed in regards to prohibition.

The Narcotic Control Act was repealed in 1996 and replaced by the Controlled Drug and Substances Act, which lessened penalties for cannabis possession. Although there have been amendments made to the act over time, it is still largely in effect today.

The Cannabis Act was supposed to legalize herbe for all of Canada’s residents, but it left out big details concerning the acknowledgement of Indigenous sovereignty. Groups were angry that there wasn’t any consultation in the legislation’s development stage, and even more upset to see that the law included no provisions to protect Indigenous sovereign, inherent, and treaty rights as they connect to cannabis.

The National Indigenous Medical Cannabis Association (NIMCA) issued a scathing criticism of Bill C-45, accusing the government of developing the legal framework without consideration for the unique situation of Indigenous people.

“Proving once again that it does not honour First Nation and Indigenous peoples, as well as our sovereign and Inherent rights, the current Liberal government in Canada has failed to meet its promises. The statement goes on to read: ‘They promised to respect our Inherent, treaty and land rights and to establish a nation-to-nation relationship,’”

“We feel lied to and unheard. The government has failed to follow through on any of its promises, especially surrounding consultation with Indigenous peoples regarding Bill C-45 and the development thereof. This lack of communication shows a severe disrespect for our sovereignty as well as an unwillingness to work together in this confederation.”

In 2000, R. v. Parker (a significant legal case) dealt the first blow to Canada’s cannabis prohibition laws. Many people viewed this as the first step towards eventual federal legalization of cannabis. The incident that started it all occurred when medical consumer Terry Parker was arrested in 1996 after police raided his home and found he had cultivated and possessed Cannabis plants–in violation of the now-defunct Narcotics Control Act .

Even after Parker was caught and charged with cultivation and possession of cannabis, he continued to grow his crop and share it with other patients in need. He argued in court that consuming cannabis was crucial for him to manage his illness effectively. The charges against him were eventually dropped, and he was exempt from the law. 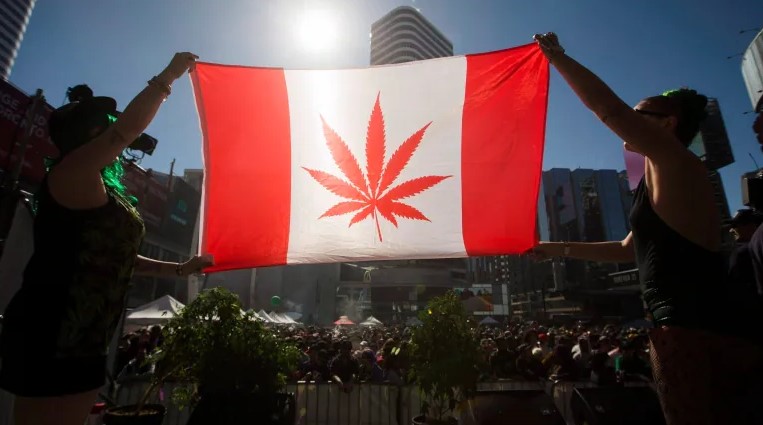 The Crown appealed Parker’s case, but the Ontario Court of Appeal sided with her. In their landmark decision, they ruled that “liberty includes the right to make decisions of fundamental personal importance- like what medication to take in order alleviate life-threatening illness.”

The case determined that preventing criminals from having access to medication they need to treat medical conditions endangering their life or health also violated their right to security. As a response, the federal government drafted the Marihuana Medical Access Regulations in 2001, which granted legal exemptions to patients meeting certain criteria so they could consume and possess cannabis. However, it would be another seventeen years before adult-use cannabis legislation took effect.

Much like the United States, cannabis prohibition in Canada has racist roots

Prohibition in Canada is rooted in racism, and people of colour still face discrimination from the justice system today. Arrests for cannabis-related convictions have disproportionately affected Black, Indigenous, Asian, and Latinx folks, although there are few resources that collect race-based crime data in Canada.

The Ontario Human Rights Commission did a study in 2020 that found some unsettling information. In pre-legalization Toronto, Black people were 3.9 times more likely to be involved in a single-charge cannabis possession case than members of other racial minority groups, despite only representing 8.8% of the population. This means that police are targeting Blacks disproportionately compared to Whites and/or other minorities.

The International Journal of Drug Policy released an analysis in 2021 that examined the arrest rates for cannabis possession of five major Canadian cities. The results showed that “with just one exception… both Black and Indigenous people are over-represented amongst those arrested for cannabis possession across the five cities examined.”

The University of Toronto conducted another study that found this idea is prominent across Canada’s justice system. The researchers discovered that Black youth are almost twice as likely to be stopped by cops in comparison to white youths, and post-arrest, black people were 50% more apt to be taken prisoner than their white counterparts – even after taking age and criminal history into account. Furthermore, in federal penitentiaries, the population of black inmates was far greater than their actual representation in society at large – “more than 300%” according to the report. And for Indigenous people? They were overrepresented by nearly 500%.

Though these data are from recent years, the patterns they reveal are not new. Data from much older documents, such as the 1995 Report of the Commission on Systemic Racism in the Ontario Criminal Justice System and 1991 Report on Aboriginal Justice Inquiry of Manitoba, show similar trends in how BIPOC are treated by Canada’s justice system.

Weed won but the work isn’t done: Mitigating the damage of prohibition

Many people think that cannabis becoming legalized in Canada means that everyone can use it without consequence, but this is not the case. An estimated 500,000 Canadians were convicted of simple pot possession before October 2018. According to the Department of Justice, in 2017 – the year before cannabis became legal – over half of all police-reported Controlled Drugs and Substances Act offences were “cannabis-related”, with 74% being possession charges.

The Canadian government’s Cannabis Record Suspension program was created to pardon those with past cannabis-related charges. However, the initiative has been largely criticized as being too complicated and difficult to navigate. To eligible for a suspension, applicants must submit an application to the Parole Board of Canada. The program is only available to those charged with simple possession offenses.

The government predicted that 10,000 Canadians would qualify for a record suspension. Yet, as of October 2021, the Parole Board of Canada stated that only 484 applications had been submitted since the program began in 2019.

Prohibition has caused extensive damage that can never be fixed, but groups such as NORML Canada, Medical Cannabis of Canada, and Cannabis Amnesty are working to reduce the negative impact for those with non-violent cannabis convictions.

In addition to this, advocacy groups are pushing for various legislative changes like the elimination of the cannabis excise tax for medical consumers, the legalization of consumption lounges, and being able to grow cannabis at home in every province.

Did the Cannabis Act legalize weed for everyone?

Although cannabis is no longer prohibited in Canada, many consumers still have difficulty accessing and consuming it due to provincial regulations. For example, landlords are allowed to ban or restrict smoking or vaping, which affects tenants’ ability to consume cannabis at home. As a result, only wealthier consumers who own their residences are guaranteed the right to consume cannabis in the manner of their choosing.

Most provinces ban or restrict smoking and vaping in public places, which often include sidewalks, streets, and local parks. As a result, people who are homeless, renters, and those who consume medical products frequently (especially those with limited mobility) risk being penalized for consuming the drug legally.

Even if you buy cannabis from a legal retailer, there can still be problems. For example, liquor stores let minors in if they’re with their parents, but dispensaries only let people of age enter— which creates difficulties for single parents who want to purchase weed products from the legal market.

Although growing cannabis at home is cheaper and can make it more affordable, residents of Quebec and Manitoba are not legally allowed to grow the four plants that other province’s residents are entitled to.

The current legal battle over home growing in Quebec was presented to the Supreme Court in September of 2022. The public is still waiting for a ruling, but even if the justices rule to allow home cultivation, those who rent their homes may not be able to grow cannabis. This is because provincial legislation allows landlords (and some condo associations) to ban any type of cannabis growth in rental units.

Advocacy is just as important now as it was pre-legalization

With the 4-year anniversary of legalization upon us, we mustn’t forget that 100 years of prohibition can’t be undone in a snap. Systematic barriers are just that—systemic. Until November 21, 2022, Health Canada is asking for feedback from anyone who has something to say about how things are going with legalization. They want to know what could be done better in areas like consumption lounges, medical access pardons, and creating an equitable industry.