Nowadays, the majority of cannabis users are well-aware of how important lab testing is for identifying molds, pesticides, and heavy metals. In addition, many experienced cannaseurs also typically require that the seeds are non-GMO, farming practices are organic, flowers cure slowly by hand-trimming buds.

PGR herbe is a little-known danger to cannabis consumers.

What Is PGR Weed?

Think of Plant Growth Regulators (PGRs) as plant steroids; they’re a type of plant hormone that controls various aspects of development, including the shape and size of roots, stems, and leaves.

The petrochemical revolution in the 1930s not only led to an abundance of new agricultural products, but also advances in technology. Scientists developed the first Plant Growth Regulators (PGRs) to increase pineapple crops, and later agriculturists applied these chemicals to other plants.

By using PGRs, cannabis growers can see greater yields and heavier buds. These compounds can alter the timing of flowering; by either shortening the growth cycle for quicker harvests or lengthening the flowering phase for bigger buds. PGRs can also make cannabis plants stronger against molds and keep them full and under-the-canopyfor indoor Sea-of-Green techniques.

Most Common PGRs Used on Cannabis

Although there are numerous studies illustrating the dangers of PGRs, some cannabis farmers persist in using them to enlarge their earnings by generating bigger and more plentiful buds.

Fewer growers would use plant growth regulators (PGRs) if they knew that they are often included in hydroponics products. The three most common PGRs for cannabis are daminozide, paclobutrazol, and chlormequat chloride. 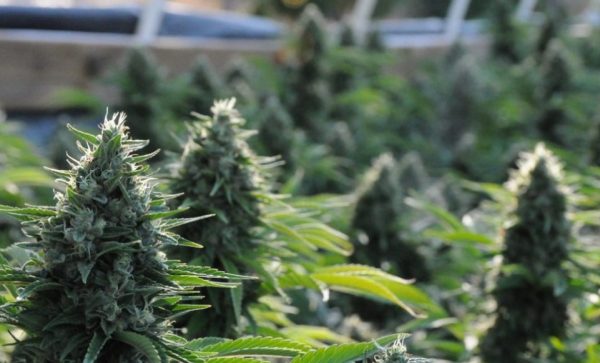 Daminozide, more commonly known as alar, was designed for flowers and other ornamental plants back in 1963. These days though, cannabis growers use this PGR to enhance their yields. The chemical decreases leaf and stem growth which allows more energy for the plant to produce flowers; however, it also simultaneously decreases trichome production , thereby lessening terpene and cannabinoid levels . You might see daminozide being marketed under names such as Compress or B-Nine.

The cells continue to divide instead of getting longer, packing closely together and creating denser buds. However, the extra weight is mostly water and cellulose. Paclobutrazol binds to crucial enzymes which also inhibits terpene and cannabinoid production.

Chlormequat chloride not only inhibits gibberellic acid but also limits vegetative growth, making plants bushier with more flowers. As a result of being treated with chlormequat chloride, these plants will usually be shorter; however, they will be more fit for indoor cultivation. Chlormequat chloride is most commonly found in agricultural products and goes by the trade names E-Pro, Citadel, and Cycocel.

You may also encounter other plant growth regulators (PGRs) such as ancymidol, ethephon, flurprimidol, and uniconazole.

The potential implications of consuming PGR weed are not only unappetizing— tastewise and in terms of effects—but the buds can be detrimental to your health. Short-term side effects of being exposed to PGR include respiratory issues, nausea and vomiting, as well as skin and eye irritation. However, long-term exposure has more severe consequences such as lung damage, fertility problems, abnormal fetal development, and a decrease in antioxidant levels in the brain which leads to lowered amino acid levels.

In 1989, the U.S. Environmental Protection Agency (EPA) classified daminozide as a carcinogen and banned its use for food products, an event that made national news when actress Meryl Streep testified in front of Congress and 60 Minutes discussed the compound in a special episode. The situation was so severe that it caused over $100 million in losses for the US apple industry alone.

Daminozide degrades into unsymmetrical dimethylhydrazine (UDMH). UDMH is mostly used as rocket fuel by scientists. However, it’s a probable human carcinogen that can damage organs and cause cells to mutate.

Smoking weed that has been treated with paclobutrazol produces nitrosamine, a carcinogen also found in tobacco. exposure to Paclobutrazol can damage the liver by causing hepatic cells to swell and reducing fertility by disrupting sperm production.

Chlormequat chloride treatment can certainly make your plants and flowers look prettier, but beware of the consequences that come with inhaling it. PGRs have been associated with skin and eye irritation in the past, and they may also cause organ damage. Inhaling too much of this substance can lead to irregular heartbeats, tremors, seizures, coma or even death.

PGRs can be harmful to not just people but also the environment. They stay in the soil for prolonged periods of time, interfering with microorganism diversity and resulting in health conditions, mutations, and even fatalities among wild animals.

How to Recognize PGR Weed

Cannabis plants that have been treated with PGRs usually produce extremely dense, hard buds. In addition, these nugs often look like they’ve been machine trimmed–a big turnoff for many customers who prefer hand-trimmed weed.

PGR weed is often characterized by its dark, lackluster color, which can be brown or even orange. If you’re unsure whether what you’re looking at is PGR weed or just poorly-cured buds, look for other telltale signs like excessive red or brown hairs and a distinct lack of trichomes.

Because PGRs stop terpene production, the buds won’t have any taste or smell. Most PGR weed has low cannabinoid content, even though it might make people feel the effects faster and for a longer time. But lots of people who use PGR weed say they have unpleasant symptoms like headaches, sweating, and feeling really tired afterwards.

While some nutrient manufacturers print PGRs in the fine print of their ingredient list, others don’t mention them at all. This can make it difficult for growers to know which products contain PGRs. Here is a partial list of products that either have or are suspected of having PGRs:

Overall, it’s fortunate that California has banned many of these products. Unfortunately, they’re still available and widely used in other states and countries.

Those who want to learn how to grow great cannabis can do so by gaining knowledge, working hard, and getting experience. A terrific place to start is by learning how to make supersoil that’s full of nutrients. For more information about growing indoor cannabis naturally, read True Living Organics by the Rev.

By adding natural growth regulators such as bat guano, seaweed, alfalfa and crustaceans to their starter soil or compost teas, organic cannabis growers can boost the levels of auxins, cytokinins chitosan and triacontanol. These essentially serve the same purposes as PGRs without any health risks or lowering bud quality.

If you want to encourage stem elongation and bud growth, add auxins to your plants. However, be careful not to use too much as it can inhibit the growth of lower buds. Adding natural cytokinins will help promote more branch formation and make the buds fuller in color.

By using cytokinins, indoor cannabis growers can expect to see more harvests per year thanks to the plants flowering faster.

Chitosan, which you can add to your organic fertilizers or foliar sprays, originates from the chitin of crustaceans such as shrimp, lobsters, and crabs. Chitin forms their hard exoskeleton. You can also put the remains of your seafood meals directly into composting piles instead. Adding chitosan will increase photosynthesis along with nutrient absorption from soils by plants.

The compound not only strengthens the plant’s disease resistance, but also boosts terpene production.

Many people use Alfalfa meal as a supersoil ingredient because it contains high levels of triacontanol. Triacontanol helps plants grow byactivating important enzymes, increasing chlorophyll production, and making it easier for plants to absorb carbon dioxide and nutrients from the soil.

Although it may be tempting to add large quantities of nutrients, growers should resist the urge. More soil additives are not always better for cannabis plants. It is important to start with small amounts and increase gradually. Overdoing it with nutrients, even organic ones, can have negative consequences such as stunted growth or poor yields. If you are uncertain about how much to use, let Mother Nature do her work; she will provide a bountiful harvest in due time.

How to Avoid PGR Weed

Even though food crops in the US can’t be sprayed with PGRs, they’re still legal pesticides in most of Europe. Also, since cannabis isn’t legalized everywhere, no universal regulations are surrounding its use – meaning it’s up to responsible growers and consumers to make sure their products don’t contain any PGRs.

The unsuspecting buyer may be tempted by PGR weed that looks like lower-grade black market or Mexican cannabis, not knowing it will produce disappointing results when used for extractions in edibles or topicals.

Contrary to popular belief, buying cannabis from a dispensary does not mean that you are safe from PGR weed. Large agriculture companies are increasingly getting involved in the legal hemp and cannabis industry, and many of these businesses prioritize profits over quality.

So, how can you tell if a plant is PGR cannabis? Look for the following signs:

To begin with, only purchase weed from those that can be trusted, like d local small growers who have a good reputation. Lastly, if you cannot find anyone to buy from, make sure your gardening skills are up-to-date and try growing your own organic buds.