For first-time cannabis buyers, dispensaries can feel daunting. After all, it’s not like trying to solve a math problem – there are many variables involved in the decision.

Herbe is typically sold to customers by the ounce, but if you want a smaller quantity, it can be bought in grams. This also goes for pre-rolls–they come in gram measurements.

When it comes to purchasing weed, buying in bulk will always save you money in the long run. But how much cannabis you should purchase also largely depends on your smoking habits and whether you smoke regularly or not. To help guide you, below is a list of some of the most common cannabis measurements and weights that are available on the market today.

Every state has different laws concerning cannabis, so if you live in a place where it is legal for adults to use, be sure to look up the regulations regarding cultivation, use, distribution and possession.

Though it may not sound like much, an ounce is a lot of cannabis. Most legal markets have limits on how much cannabis one person can possess.

Every state possesses different laws concerning carrying and possessing marijuana. The amount you’re allowed to carry also varies from state to state. For example, in Colorado people are allowed to possess up to 2 ounces or 64 grams for personal use while in California adults over the age of 21 can only possess 28.5 grams, just over one ounce. In Massachusetts, the limit is having one ounce on your person but you’re allowed to have 10 ounces at home.

Although cannabis cannot be federally legalized, medical marijuana is currently legal in 38 states while adult-use marijuana is only legal in 18. You can check our map to see if cannabis is available near you. 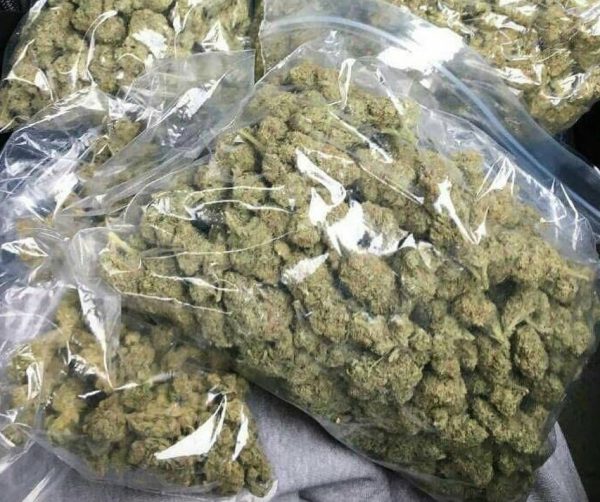 Note: Depending on the size of the buds, a gram of weed can actually vary in density depending on the souche. The most precise way to know the true weight of your stash is by using a scale. The photos below are an estimate to aid you in visualizing what each weight looks like.

The smallest amount of weed you can purchase is called a gram.

The weight of one gram is the smallest you can purchase at most dispensaries. Its popularity comes from beginner smokers or experienced smokers who want to test a new strain. It typically costs $5 to $20.

The density of cannabis nugs can vary. For example, a small but very dense nug may weigh one gram, while a larger but less-dense pile of ground weed might also weigh one gram. Pre-rolled joints are often sold in single-gram sizes. 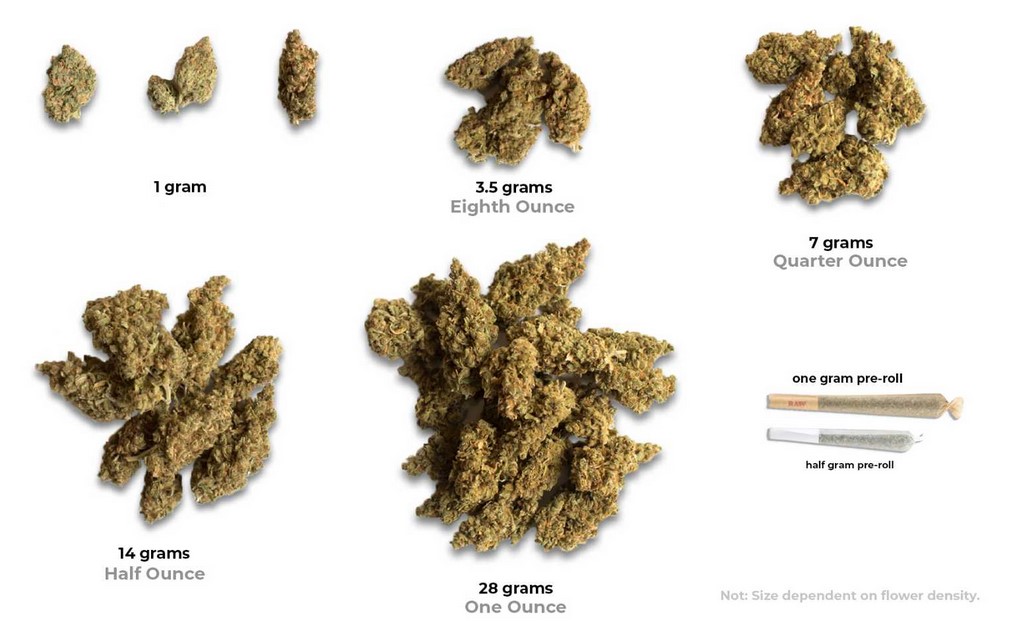 In cannabis markets, an eighth refers to 1/8th of an ounce and costs roughly $40 to $60. However, investing in developed markets such as Oregon or Colorado will be more affordable in the long run–you can find eighths for as low as $20.

The majority of people who purchase from our store prefer to buy eighths of flowers, by far. 60% of sales are an eighth,” says Patrick Stad, CEO and founder of The Cure Company based in Los Angeles, California.

Consumers typically by eighth-sized bags of weed as it is the perfect amount to roll three to four joints. It also lasts users a few days to weeks, making it a common purchase in regulated marketplaces.

A quarter ounce, or 7 grams, is a popular measurement to buy weed in because it usually lasts users a while. This amount is equivalent to about seven joints or ten bowls of weed, depending on the size of your pipe. A quarter can also be used for at-home baking projects that only require a small amount of weed.

Although a half-ounce of cannabis may sound like a lot, it all depends on how regularly you smoke and the size of your joints. Those who frequently consume cannabis could finish an ounce in one week or less, while those who don’t smoke as often might make their supply last for an entire month. Store your product in darkness to keep it fresh and quality sealed shut.

Purchasing one ounce or 28 grams of cannabis is the limit in many states. This amount is also commonly referred to as a “zip,” which is slang for a large quantity of weed that usually fills up a small Ziploc bag.

The average consumer will stretch an ounce of weed to last a month, or about 28 joints. Dispensaries are required by law in most markets to pre-weigh cannabis before selling it to customers, similar to how other packaged goods like candy bars or chips are weighed and then bagged.

Dispensaries don’t always have an ounce bag, so sometimes they add together eighths or gram-sized packages to equal an ounce. If you purchase an ounce, the dispensary may have to give you pre-weighed eighths, so you receive eight little bags total. “The issue is,” says Stad, “if we sold out of eighths and all that was left were ounces, the customer wouldn’t be able to break it down to an eighth.” It’s a balancing act between regulations and consumer demand: consumers usually want eighths because they are more affordable.

A pound of weed weighs approximately 453.59 grams and is only legal in industrial spaces in the US. In other words, most people cannot possess a pound of cannabis due to new regulations that state how much weight a person can carry. Even though weed is now legal in 18 states, these states want to prevent illegal selling by limiting the amount adults can have on them at one time.

Having a mastery of metric cannabis measurements comes in handy, especially when you visit the dispensary. This way, you’ll never be caught off guard by the weights of different strains, and you can see for yourself what each one looks like per gram.

Most cannabis is sold by the ounce, gram, eighth, or quarter. An “eighth” refers to an 3.5 grams – that is, 1/8th of an ounce. The time frame in which your stash will last largely depends on both how frequently you smoke as well individualized need.