Marijuana tea may have a lot of advantages, including the potential to reduce nausea, improve hunger, relieve stress and anxiety, protect heart health, cure pain, prevent cognitive degeneration, and boost the immune system.

The Origins of Marijuana Tea

Cannabis tea isn’t a new invention; in fact, it dates back to prehistory. Cannabis tea has been used in different ways across various civilizations over the years. Marijuana tea has historically been eaten for medicinal or ceremonial purposes in many areas, while others consume it merely for the sake of getting high.

Cannabis tea has been embraced by many communities, but one of the earliest was Jamaica. Pregnant mothers there traditionally use marijuana to help combat worry, anxiety, and morning sickness. (Note: healthcare experts advise against the use of cannabis while pregnant). In Jamaican rural areas in particular, cannabis is referred to as “ganja” and ganja tea is used as a common medicinal remedy. According to reports, one Jamaican official claimed that he used ganja tea to cure his daughter’s asthma. Ganja tea is usually prepared from immature plants that have not yet matured for harvesting, so the beverage is less potent than smoking dried mature buds.

India has a long history with cannabis tea, which can be traced back to 1000 B.C. The hot drink, called bhang, is still widely consumed today. Bhang is made by combining milk, marijuana and spices; the dry ingredients are ground using a mortar and pestle

Bhang is primarily used for religious purposes; it’s frequently given as a gift to the Lord. This is because cannabis is mentioned in the Atharva Veda, a sacred text in Hinduism, as one of the five most holy plants. At supper time, Indian families frequently offer bhang to prominent visitors. Marijuana tea is also utilized to treat fever, sunstroke, and stomach problems.

How to Make Cannabis Tea 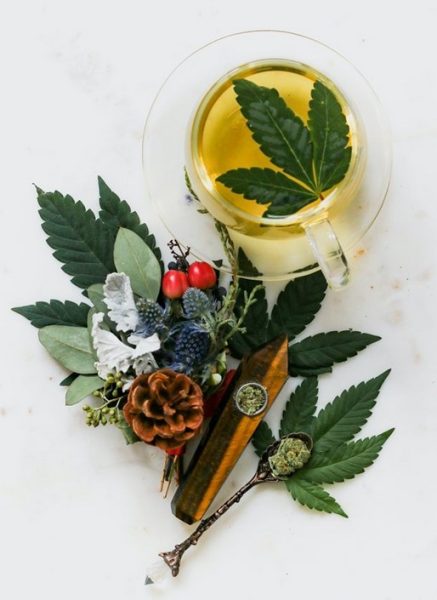 Cannabis tea comes in a variety of flavors, thanks to the wide range of variations based on personal taste and the intended goal. The drink can range from a light, non-psychoactive tea consumed to reap the health advantages of cannabis to a thicker, more creamy brew that will induce a calm high an hour or two after consumption (similar to marijuana-infused edibles).

Some people like to make tea with cannabis flowers, while others prefer using stems. The technique of making marijuana stem tea is a wonderful method to utilize stems that have been removed from the buds. Stems used in any recipe will not be as psychoactive as buds that have been infused with THC, regardless of what material is utilized. Making various sorts of tea is essentially the same procedure.

Simply steep the stems or broken-up flowers in hot water as you would with normal tea to produce a mild, non-psychoactive cannabis tea. Some people add additional herbs, spices, or tea leaves to personalize the flavor. This is an excellent technique to get the health advantages of cannabinoids from brewed cannabis flowers or cannabis stem tea without feeling high afterward.

People looking to get a high from cannabis tea need to employ decarboxylation (heating cannabis enough to activate cannabinoids like THC) and ensure solubility. Solubility means that the compound must be able to dissolve in water; without this, the effects of the marijuana will not be noticeable. To decarboxylate weed before brewing it into tea, break it into small pieces and bake it at 230 degrees Fahrenheit for 40 minutes while stirring occasionally so that it heats evenly.

To make a potent marijuana tea, you’ll need some type of fat to bind to the THC (which isn’t soluble in water). A good amount would be half a cup of milk or one tablespoon of butter or coconut oil. Boil 3 cups of water in a saucepan, add your chosen fat, and let it melt into the water. Then, add a gram of cannabis before simmering for at least 15 minutes so it’s fully infused. To finish, strain the contents through a coffee filter to remove any solids.

This marijuana tea is mouth-wateringly delicious, and it can be made to your own liking by adding in spices or different types of tea leaves.

What if I told you there was no need to microwave your buds? Another alternative is to add a pinch of kief to an already-brewed cup of tea, which will turn it into a cosy, high-inducing cup of kief tea.

Many people also prefer to unwind with a cup of CBD tea. Because CBD is non-psychoactive, this is a fantastic method to manage anxiety or pain without experiencing the high or negative undesired effects associated with THC, such as anxiety or irritability. CBD tea is also an excellent sleep aid for individuals who have difficulty sleeping.

Cannabidiol (CBD) can be found in certain high-CBD marijuana strains, but it’s also present in significant amounts in hemp. This is a fantastic alternative for individuals seeking to avoid even trace quantities of THC due to job drug testing or other undesirable effects.

Because CBD is not water-soluble like THC, it’s important to mix in milk, butter, or coconut oil to the water you’re consuming it with. This ensures that your body will absorb the CBD.

Can Aid In Pain Relief

The impact of marijuana tea on pain is probably one of the most well-known and studied advantages of this plant. THC, the active component in cannabis, binds to our brain’s pain receptors in the same manner as other pain medications to provide comfort and relief. Furthermore, marijuana may lack several of the hazardous side effects associated with pharmaceuticals. Marijuana tea is widely employed by people to alleviate extreme discomfort from long-term illnesses such as arthritis.

THC’s psychotropic activity in the body has mood-boosting and neurotransmitter-releasing effects, meaning that marijuana tea can reduce levels of stress hormones and relieve anxiety. This may help people struggling with depression and chemical imbalances, as well as those who are overwhelmed or stressed.

Marijuana tea is thought to be soothing and relaxing, and it may help improve blood pressure and stress in the body. This might be achieved by relaxing blood vessels and arteries, which might reduce your risk of heart attack and stroke by relaxing the body. 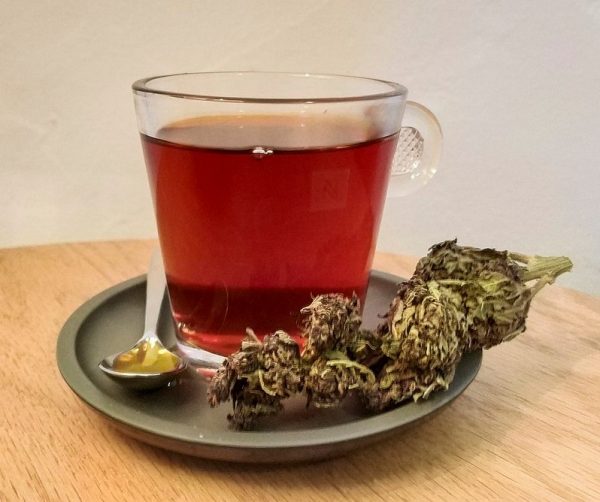 A number of studies have found that cannabis tea’s cannabinoids can help improve cognitive activity, and THC has been linked to better memory and focus. With Alzheimer’s disease still largely a mystery, these findings are especially exciting given the potential for this all-natural tea to provide a non-invasive cure.

Creating tea from marijuana leaves can have a sedative effect, depending on the strain of marijuana used. This sleep-inducing property can be beneficial for those who struggle with insomnia or frequently have their sleep interrupted. The resulting sleep is usually restful and uninterrupted, and people often wake feeling refreshed! [7]

Marijuana tea isn’t only great for those with upset stomachs, but it can also help relieve gut inflammation and prevent nausea and vomiting. If you suffer from IBS or any other form of chronic stomach issue, give this tea a try!

Cannabidiol has been shown to significantly reduce the likelihood of relapsing into alcohol or drug use. Additionally, it is effective in curbing cocaine cravings.

The negative effects of marijuana tea are comparable to those of smoking marijuana in its natural form, and they include:

However, these adverse effects are extremely unusual and happen when someone takes too much marijuana or THC without considering how it will affect the body.

Given that marijuana and its derivatives, like marijuana tea, are often surrounded by controversy with many unverified negative claims about side effects, it’s understandable that people may be cautious. However, as more countries begin to seriously consider legalization, unbiased research is being conducted which thus far indicates that marijuana is safe and effective. Marijuana tea remedies in particular are growing increasingly popular as a result of this new information.

No matter where you stand on the cannabis spectrum, it is crucial that you familiarize yourself with your state and city laws in regards to these products. For example, hemp-derived CBD products are Federally illegal in the United States; however, many states have decriminalized them. So, if you plan on travelling with these items or using them while away from home, make sure to crosscheck the local guidelines first. Remember that most CBD products are not FDA-approved, so they may be sold illegally or with incorrect labeling. Keep in mind that CBD has the potential to produce negative side effects before taking it, such as nausea, dizziness, and dry mouth. Also keep in mind that when taken together with blood thinner medications, it can have severe drug interactions. If you have a serious or chronic condition, check with your doctor first.

People frequently ask questions about cannabis tea since it is not a typical way to consume marijuana. Here are some answers to the most common inquiries.

Can you make tea with marijuana?

Yes! Stems and flowers from the plant (or even leaves for those who grow their own and have trimmings) may all be used to make marijuana tea. Many individuals like to mix a pinch of kief into their favorite tea after it has been brewed.

Does weed tea get you high?

The level of intoxication one experiences from consuming cannabis tea depends on the ingredients used. If no oils are used to bind the THC, then there will be no psychoactive effects. However, if a fat such as coconut oil, butter, or milk is added, it will help the THC bind and infuse, thus creating a marijuana tea with psychoactive properties. In contrast, CBD tea has no Psychoactive effects.

How long does weed tea take to kick in?

Marijuana tea’s effects are similar to those from cannabis-infused edibles. They can take anywhere from 30 to 90 minutes for people who aren’t used to marijuana tea to notice. Those who are unfamiliar with cannabis tea are advised to start with little doses until they’ve built up a tolerance level.