What is cannabis pollen?

Cannabis pollen is produced by the male plant and released to fertilize a female plant, just like many other plants. Cannabis is dioecious, meaning it can produce both male and female plants. Cannabis pollen is characterized by its fine powdery appearance that resembles pale yellow cornstarch. Pollen plays an important role in continuing a specified lineage or creating hybrid strains through crossbreeding, and thus cannot be understated in importance.

Cannabinoid pollen is frequently derived from male plants with XY chromosomes. Male genetic plants will naturally produce pollen in order to fertilize a female plant. The pollen may travel by the wind until it reaches a female in a natural setting. Cannabis pollen, on the other hand, can be obtained from the plant and utilized with another specific plant partner in more controlled settings.

Pollen that has been collected can be used for cross-breeding purposes. Though it is commonly believed that only male plants produce pollen, female cannabis plants with XX chromosomes can also create pollen through a process of manipulation. This allows feminized seeds to be produced.

It is also possible to buy ready-to-use cannabis pollen, which is typically acquired via these two methods. However, it may be costly to obtain and challenging to locate depending on your location. 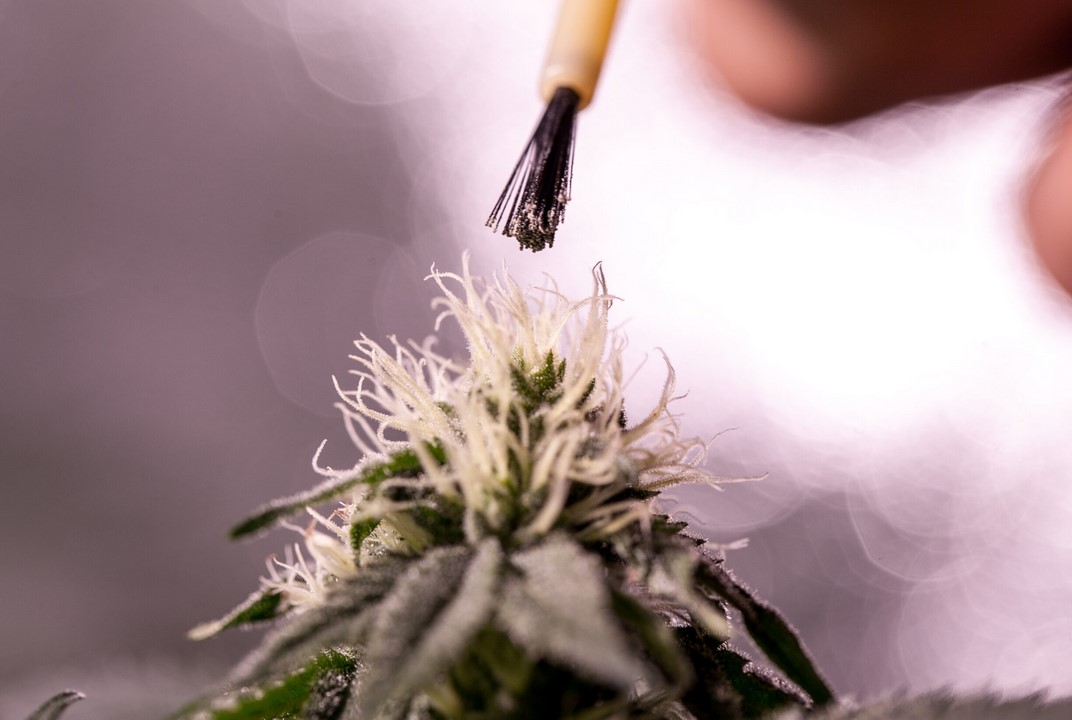 How to collect pollen for later use

Collecting pollen is a difficult task that must be handled with care and patience. Growers will notice the pollen sacs begin to expand as male plants mature; this is an indication that they are near to opening up and distributing their pollen. The production of pollens generally begins several weeks into the flowering cycle.

The first step to collecting pollen from an indoor plant is creating the perfect environment – one free of Breeze or electric fans. By ensuring that these aren’t near the plant, you increase your chances of successful collection. With the right scene set, it’s time to start collecting!

Cannabis pollen may be gathered in a number of ways, either by waiting for the pollen sacs to open and pollen to fall on the leaves or by picking it off the leaves after it has done so. It may be dusted over a clean sheet of paper and then collected once it’s on there. Another option is to remove the pod from the plant and gently tap it against paper. You will notice a nice tidy pile of pollen after a few gentle taps.

It takes several weeks for the plant to fully prepare its pollen pod. Those with extensive growing expertise, on the other hand, may be able to determine when it’s ready and squeeze the unopened pollen sacs, collecting the pollen. This necessitates excellent timing because the pollen must be fully matured in order to be viable.

How to store cannabis pollen

Now that you’ve gathered the pollen, you’ll want to find a way to store it if you’re not planning on using it right away. Cannabis pollen should be kept in a cool, dark place that is also dry and, most importantly, free of moisture. When it comes to preserving pollen, moisture and humidity are your worst foes. When storing pollen, an area such as a pantry cupboard would almost certainly be your best choice for location. To minimize the danger of any moisture damaging the pollen, some people use silica gel sachets.

In general, pollen kept at room temperature, such as in a cupboard, will last approximately 1-3 weeks. However, if you want to keep your pollen for longer than that, it might be stored in the refrigerator or freezer. It can stay up to 3 months in the fridge and up to 12 months in the freezer. Using silica gel is essential when storing pollen in those conditions since they are prone to produce moisture quickly.

Use a suitable container to store pollen

An airtight container is vital to safeguarding your pollen. While some beekeepers prefer ziplock bags, the safest option is an impenetrable and light-proof container.

The connection between pollen and cannabis breeding

Cannabis pollen is also used to cultivate cannabis. While pollen use in the wild is mostly down to luck and location, strains may be crossbred with ease and success in a more controlled environment. But why is pollen such an important ingredient for cannabis breeding?

There are two types of breeding- inbreeding and outbreeding. Inbreeding is when both males and females of the same cannabis strain cross, resulting in seeds that closely replicate the parent plants.

The other way to breed is called outbreeding, which happens when you cross a male and female plant from two different strains. This has led to some new created hybrids, like autoflowering variants that we use today. By combining different strains, you can get higher potency, varying effects and flavours, as well as different growth traits–just to list a few possibilities. Although it’s also possible create not so great combinations too. Breeders with more expertise and daring will learn about genetics and how to use it to create specific qualities in designer strains.

The process of cannabis breeding with pollen is uncomplicated. All that is necessary is a male and female plant in the same space while they are flowering so that seeds can form. If pollen is present and there is a receptacle female plant, breeding will take place.

What to consider when breeding cannabis

There are numerous factors to consider when producing cannabis seeds. This is due to the fact that you must choose which strains, look for particular characteristics, and understand dominant and recessive cannabis genetics. You can make some high-quality “homebrew” or “craft” cannabis from home with a thorough grasp of all variables. Let’s look at each topic individually and get a general understanding. 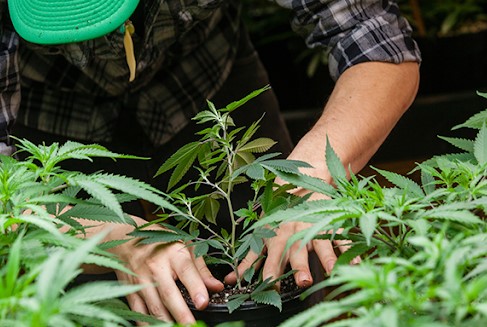 Which strains to start breeding with

Even if you choose two top strains, such as OG Kush and White Widow, the next generation of plants is no more guaranteed to be excellent. So take some time selecting your strains and don’t be afraid to experiment. Who knows? Perhaps the oddest combination of seeds will end up being your most successful?

How to select the best phenotypes

You’ll end up with a new batch of seeds as soon as the first plant you buy flourishes. Even though they come from the same parent strains, these new seeds have different genetics and will grow into unique phenotypes. It’s similar to how two people can have multiple children, all of whom are different individuals phenotype-wise. But what qualities should you look for in a phenotype?

Whether you do it in your spare time or want to start your own seedbank, the aim of a breeder is to find desirable characteristics in the seeds for the next generation and selectively breed them. It may appear to be a difficult goal, but it needn’t be.

To do this, you’ll first need to decide on which traits you want to continue breeding. This can be a multitude of various ones, such as yield, particular aromas, flowering time, colour and resistance to pest and mould. It may take a little time to get familiar with your strains if you’re new to the task buttrust me- it will be worth it in end whenyou’ve cracked it! You’ll instantly know what characteristics you like or dislike in certain strains.

How to use pollen to breed cannabis

Pollen collected from a male or reis female plant can be used to breed cannabis. As mentioned previously, this can either be achieved through inbreeding, which is impregnating a female with her own pollen, or outbreeding, which is using pollen from another source. Let’s say you’ve collected and stored pollen from your own plants. You can always look to the process of seed production and self-pollinate by applying the cannabis directly onto a female plant. By placing a male and female cannabis plant close to each other, you can increase your chances of producing pollen. You can either create a tent that uses fans to circulate air and mimic an outdoor environment, or you can rub the leaves of the male plant over the exposed pistils of the female plant.

The actual process of breeding plants, regardless of which method you choose, is a rather easy one and comes down to timing. Many growers don’t pollinate until the plant has been flowering for around 24 days.