Increasing numbers of individuals are becoming aware of the therapeutic possibilities of psilocybin for anxiety.

These psychedelic mushrooms may help with low mood, anxiety, and depression while having few negative effects. They are thought to have a minimal impact on the body’s serotonin levels.

Microdosing mushrooms has been reported to improve creativity, energy, and focus while making stress easier to tolerate, according on anecdotal evidence.

Do they work, and what is their mechanism of action? Don’t they sound wonderful? What exactly do these assertions mean if not that you will be living in a castle on top of a hill by the sea, with your own butler looking after you? Let’s have a closer look at them.

Magic Mushrooms and the Brain 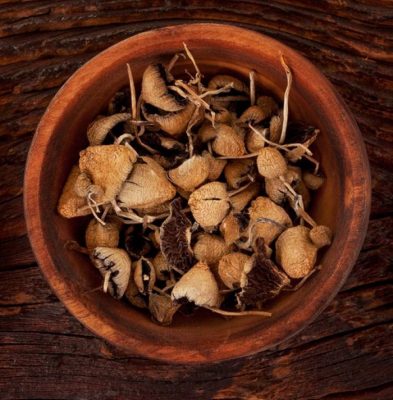 Mushrooms containing psilocybin are known as magic mushrooms. Psilocybin has hallucinogenic properties in moderate to high doses, resulting in altered sensory perceptions and visual hallucinations. It also appears to have anti-depressant and anti-anxiety effects that can last for several hours after ingestion.

Psilocybin mimics the structure of serotonin, which explains why it has these effects. This neurotransmitter has a variety of important roles in the body, including mood and stress response management.

Psilocybin binds to three of the serotonin receptor cell receptors. It primarily affects 5HT2A receptors, although it also influences 5HT1A and 5HT2C receptors. The latter two appear to have an effect on anxiety-like behavior, at least in part explaining psilocybin’s anti-anxiety effects.

Furthermore, magic mushrooms may help anxiety by boosting neuroplasticity, according to recent studies. This phrase refers to the brain’s capacity to alter neurons’ structure and function through neuroplasticity.

Finally, psilocybin is thought to reduce activity in the default mode network (DMN). The DMN emerges when we daydream, contemplate the past or future, and reflect on ourselves. When the DMN becomes excessively active, it can cause issues such as rumination, which frequently leads to sadness.

Research on Magic Mushrooms for this Ailment

The 1970s marked the end of research into psychedelics, which were classified as a Schedule I drug in the Controlled Substances Act. As a result, there are relatively few studies on whether magic mushrooms can help with depression, anxiety, and headaches.

However, there is some promising evidence available. A 2017 study published in The Mental Health Clinician reviewed studies on psilocybin for anxiety, depression, obsessive-compulsive disorder (OCD), and addiction. The findings were mostly positive, although the studies were limited in size, necessitating further study.

Furthermore, according to a 2017 article in the Harm Reduction Journal, psychedelics might help with and decrease the frequency of migraines and cluster headaches. These findings are significant because these severe illnesses are typically resistant to common therapies, which causes suffering for those who suffer from them.

In the medical world, the word “cure” has a negative connotation. It implies a complete resolution of symptoms, but there are few diseases for which this is truly feasible.

In many situations, a treatment’s greatest impact is to alleviate a patient’s symptoms enough that he or she can live a decent life. Furthermore, to get optimal alleviation, patients frequently need to use several therapies. Anxiety is an excellent illustration of this.

Other research has found that psilocybin can reduce anxiety in people with treatment-resistant depression, suggesting that controlled use of psychedelics may assist. However, when using anxiolytics and magic mushrooms together, caution is advised.

Selective serotonin reuptake inhibitors (SSRIs) are one of the most common anxiety therapies. SSRIs and psilocybin have similar effects on the brain, so drug interactions are a possibility.

If you’re wondering whether psychedelic drugs are a good fit for anxiety and are presently taking antidepressants, speak with your doctor first.

Can Magic Mushrooms Cause Anxiety?

Magic mushrooms and anxiety are connected at several levels. When individuals consume psychedelics, their mood tends to be amplified, which means that using magic mushrooms while in an anxious state might make matters worse.

It’s impossible to predict whether anxiety will go up after taking LSD, but if it does, it might make for a stressful experience. As a result, it is critical to plan for a psychedelic trip carefully, including developing a positive mindset before intake.

It is possible to minimize the likelihood of anxiety by controlling the amount consumed.

It’s also feasible to reduce the hazard of anxiety while taking psilocybin by regulating the dose. This was proved in a 2016 research on psilocybin for cancer, stress, and depression patients which found that controlling the dose reduced the incidence of anxiety.

The use of psilocybin in tiny doses to optimize its advantages while minimizing unwanted effects has grown more common.

For those who don’t want to take in a full, psychedelic trip with magic mushrooms, microdosing is an option.

Microdosing is the practice of taking tiny dosages of a drug so that its psychotropic effects are barely noticeable.

While research is still in its early stages, anecdotal evidence suggests that psilocybin microdosing may offer the following benefits:

Microdosing psychedelics has been said to help you enter flow states, improve performance, and promote creative thinking. However, there is currently little clinical research to support these claims.

It is also critical that anyone interested in microdosing magic mushrooms educate themselves with the laws and regulations in their region. Psychedelics are still largely prohibited, and readers must check the laws in their region to avoid being penalized.

Want to Try Microdosing? Here’s How to Start with Mushrooms

For people who live in jurisdictions where microdosing with magic mushrooms is allowed, the procedure is quite straight-forward. 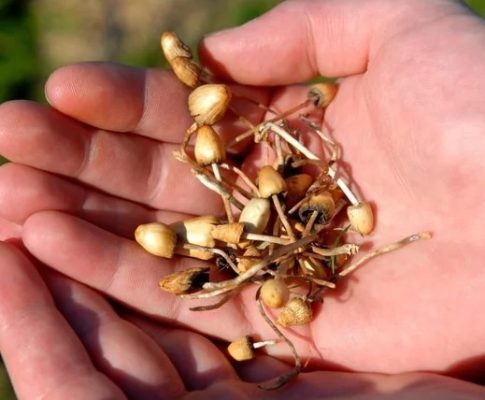 Dried magic mushrooms are the most convenient method to microdose. Mushrooms can be dried in a variety of ways, but dehydration is the most effective.

If this isn’t an option, spread the mushrooms on a parchment paper-lined wire rack and dry them in an oven.

Place the mushrooms in a single layer on a pizza pan or little oven-safe plates and set them aside. Set the oven to its lowest setting and leave the door cracked with a wooden spoon. Check on the mushrooms every few hours until they are totally dry (this might take many hours).

Allow the mushrooms to dry fully before grinding them into a fine powder and keeping it in an airtight container in a cool, dark, and dry place.

The dosage that constitutes a microdose will vary from person to person. A reasonable starting point is 0.1 grams. The magic mushroom threshold dose is roughly 0.2–0 on average. A moderate dose is considered to be 1–2.5 grams.

Increase the dose until mild effects, such as drowsiness, appear. Then reduce the amount just slightly to obtain a precise microdose.

For microdosing, many people prefer to fill empty capsule casings with mushroom powder. This method allows for simple consumption and conceals the mushrooms’ flavor, which may be unpleasant in some cases.

However, you may also add the powder to food or drink in a controlled amount at the start of the day.

It’s not a good idea to microdosing magic mushrooms on a daily basis. Tolerance can develop if you do it too often, in which bigger doses are required to achieve the same results.

There are a variety of ways to schedule microdosing mushrooms. After four days of dosing, take three days off before repeating the process. Another strategy entails dosing on Day 1, taking two days off, and then dosing again on Day 4.

The later technique, however, may be more popular since people usually still feel the consequences of microdosing the following day.

Magic mushrooms, according to early research, may help with anxiety symptoms. However, there is still a lot to learn.

Because magic mushrooms exaggerate emotions, it’s essential to use them under the guidance of an expert.

Because magic mushrooms tend to heighten feelings, it is essential to utilize them under expert supervision and with professional assistance available if required. This is especially true for people who have psychosis, schizophrenia, or severe anxiety.

It is important to get a psychological evaluation before taking magic mushrooms to treat anxiety, and only do so if the drug is both safe and legal.