The Ewok marijuana strain, often known as Alien Walker, is a transcendental journey that blurs the distinction between relaxing and euphoric. The name is apt, given that many users have compared the overall appearance of the strain to that of cute, fuzzy creatures from pop culture fame.

The Ewok strain is the result of a powerful combination between Albert Walker and Tahoe Alien. The Tahoe OG Kush/Alien Kush mix is known as Tahoe Alien.

It’s no surprise that Ewok Sativa Unrolled has a reputation for winning awards and accolades, given its illustrious history as the “who’s who” of real kush cultivation. It was the winner of the 2013 High Times Cannabis Cup in Seattle, and it continues to make an impact on cannabis lovers everywhere.

What is the Ewok Strain?

The Ewok Sativa Unrolled Strain is indica-dominant, and while some cultivars may have a strong sedative effect, the high generally allows for soothing serenity while it unlocks creative inspiration. Users praised the strain’s ability to relieve minor bodily pains and aches, as well as decrease nausea and vomiting.

Ewoks marijuana, like other marijuana strains, has a relaxing effect and may lead to feelings of contentment. Those who are depressed or anxious may find some comfort in the Ewok marijuana.

Despite its euphoric and relaxing high, the Ewok strain has a moderate THC concentration. Newcomers should start with Ewok in smaller doses since the drug has an average THC level of around 20%.

A single gram of this stuff will set you up for the rest of your life, allowing for a good night’s sleep. As a result, most seasoned consumers consume it in the evening or when they have no major responsibilities or duties to complete.

The high is often sluggish and creeps up on users. The psychoactive effects don’t have the abrupt onset that certain powerful strains may provide, but this may be preferable for some individuals. Many claim that the slow, laid-back unfolding of the buzz helps them relax and unwind even more.

The first breath is typically associated with a surge of calm that spreads throughout the body; injuries and pains gradually subside, and after a few minutes, people may notice an increase in mood.

The Ewok Sativa Unrolled strain has a pungent, distinct aroma. It’s packed with bursts of citrusy, sour lemon tones, as well as a trace of diesel. Sweet earth and pine are among the fragrances noticed by some consumers. When the smoke continues to burn, other scents such as herb, fruit, and wood chips emerge.

The Ewok strain has a complex profile. Users frequently detect the crisp taste of sour, citrusy lemons on the inhale. Clean pine notes, as well as a hint of dank and a sharp tang of diesel, round out this flavor. Sweet fruit, mint, and a smooth earthiness with just the right amount of nuttiness and hash balance it out.

The Ewok strain is one of a kind. It has dense and plentiful buds covered in a thick layer of trichomes, as well as robust leaves. The icy resin makes this plant very sticky. This strain also includes hues of green and yellow that are light and bright.

Both indoors and outside, Ewok Sativa Unrolled seeds may be cultivated. Indoor harvesting takes an average of 8-9 weeks, while outdoor harvesting generally begins in the end of September and lasts until early October. While the strain matures quickly, it is not a strain for inexperienced growers.

It grows best in a warm, dry environment because it is susceptible to mold and mildew. While this strain is mostly indica, it has sativa characteristics passed down through its indica side. As a result, growers with limited space may find that this strain is not suitable for them.

The Ewok strain thrives best in organic soil when it comes to a growing medium. The strain gets more powerful and has a complex flavor profile when grown in soil rather than hydroponics.

It’s well worth it to grow Ewok cannabis, especially if you’re a first-time grower. There’s a lot of nurturing required while growing Ewok marijuana. Many of the crops are large. Indoor harvests may produce up to 300 grams per square meter, which is quite a bit. Outdoor growers may anticipate 400 grams or more per square meter. 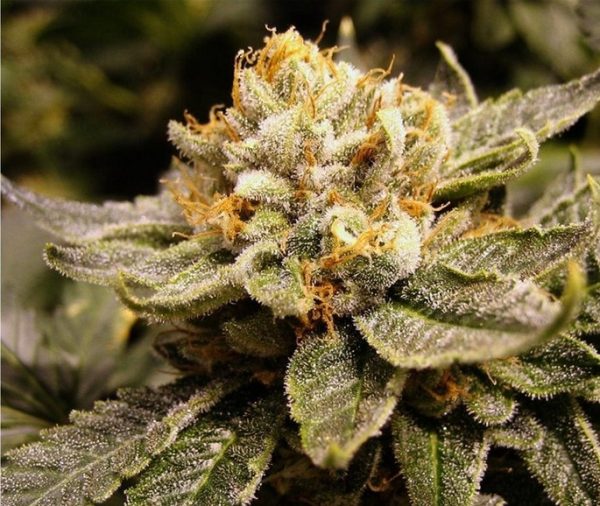 This strain has an average THC level of 20%.

Medical Benefits of the Ewok Strain

Users of the Ewok strain frequently use it to alleviate insomnia (as well as other sleep problems), nausea and vomiting, minor bodily aches and pains, and headaches. Others consume the drug, however, to reduce stress and induce feelings of contentment and euphoria.

Users of Ewok claim that it enhances creativity by allowing them to focus their thoughts. It may also be beneficial for individuals suffering from mood disorders, sadness, anxiety, and post-traumatic stress disorder.

Possible Side Effects of the Ewok Strain

The Ewok strain may have some negative side effects. Drowsiness and nausea are possible, as well as a headache.

Final Thoughts on the Ewok Strain

The Ewok strain is great for people looking to relax and chill out. The indica dominance of the strain gives a calm and peaceful high that comes on slowly but lasts long. Users of this cannabis strain who have sleeplessness or minor pains frequently find comfort. It has an euphoric and cheerful high, as well as the ability to relieve symptoms of sadness and anxiety.

Ewok marijuana serves as a motivational tool, but it can also be used to stimulate creativity. Its effects are popular among artists and other creative individuals. Ewok marijuana has a short growth cycle of 8-9 weeks indoors, with outdoor harvest usually beginning in late September through early October.

The Ewok strain, as a whole, is an excellent choice for anybody searching for a natural stress reliever. Have you ever used Ewok cannabis? Please leave a remark below and participate in the discussion!