If you’ve ever inspected a cannabis flower, you’ve probably noticed a thin layer of little crystals covering the plant’s leaves and buds. These crystals are usually extremely brilliant and clingy, with a strong and distinct odor that is characteristic to that strain.

If you look even more closely at these crystals through a microscope, you’ll see that they aren’t genuine crystals; instead, they are tiny resin-coated growths that protrude from the plant material like little spikes or hairs. These are the plant’s trichomes (from the Greek word “Tríchōma,” which means “hair growth”), named for their resemblance to hair.

If you’re looking at a mature weed plant, trichomes are the tiny white hair-like growths sticking out of the buds and sugar leaves. Interestingly, the word comes from the Greek term “tríchōma”, which simply means “growth of hair”. From a distance, though, trichomes appear like a layer of frost over the flowers. Ever heard someone equate “THC crystals” or resin to harder-hitting weed? What they’re talking about, whether they realize it or not, is a high amount of trichomes. These tiny hairs, which are barely perceptible, contain a far greater proportion of cannabinoids, flavonoids, and terpenes than any other portion of the plant.

While we’ve so far only discussed marijuana, trichomes can be found on many other plants as well. They appear different and have varied functions, but they’re all trichomes. Only in the context of cannabis will we talk about them at length.

What do trichomes do? 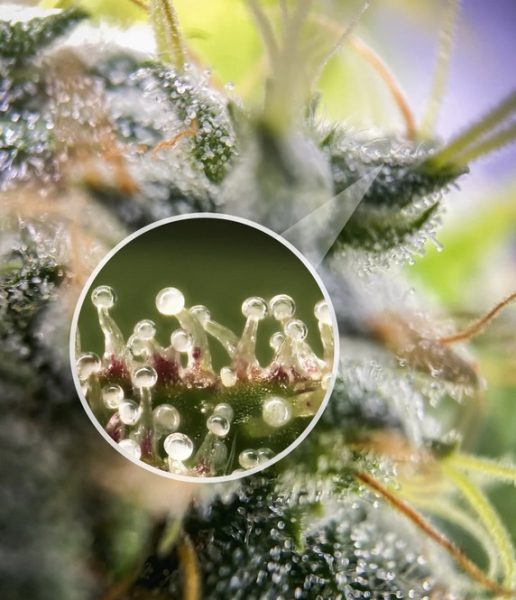 Trichomes are the “enjoyable” aspect of the cannabis plant, as they contain all of the goodies, but they do much more. Trichomes perform a variety of functions throughout the life cycle of a cannabis plant. When a marijuana plant reaches maturity, trichomes begin to develop. The trichomes protect buds, or flowers, from predators as they get larger and more vulnerable. The trichomes act as an obstacle for animals and insects by providing a powerful fragrance and harsh taste. As the plant matures, so do the trichomes, which explains why they’re also so important. The site of cannabinoid production is the trichomes, which implies it’s where THC and other cannabinoids are created! CBG is a precursor to several of the most common cannabinoids, including THC. Enzymes break down and alter CBG in order to produce the remainder of the cannabinoids. The trichomes are where the plant’s terpenes are formed. The aromatics are mild and somewhat bitter when the plant is growing. Near the conclusion of the flower cycle, the flavonoids become more sophisticated and much sweeter. A completely mature pot plant will have a fruity and floral fragrance as opposed to a typical “weed” aroma generated by the plant material.

Trichomes are also a visual indication to growers that a plant is fully mature and ready to be picked. When the plant is in its early phases of growth, the trichomes will be tiny and transparent. The resin within the trichomes will become opaque as the plant matures, eventually turning pale yellow when examined using a microscope. Trichomes and pistils appear similar to the untrained eye, and they both develop from the plant’s calyx. Trichomes are a type of sticky crystal that grows on the flower and smaller leaves of the plant. Pistils are tiny hairs that attract and collect pollen. The pistils are an excellent indicator of a plant’s maturity. When a flower is first buds, its pistils will be white and erect in order to collect pollen as it blows in the wind. When a plant is ready to be harvested, its pistils may sometimes turn golden brown.

The surface of the plant is covered with bulbous trichomes, which are tiny bulbs. They can only be seen under a microscope. Although their role in producing cannabinoids is unclear, they give the cannabis plant a crystal-like sheen and help to make the flower sticky. Bulbous trichomes are equally distributed across the plant’s surface. 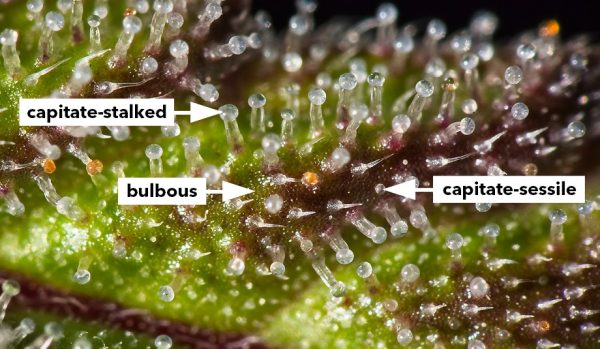 When do trichomes appear?

Trichomes are most visible on healthy plants in the early flowering stage. Trichome heads become increasingly opaquenot only because they get dirty, but also because they dry and shrink with age. nIf the trichomes have become amber, the cannabis plant has probably passed its peak potency. This attribute allows trichomes to be used as a timelimit for when a crop should be harvested. Most growers keep track of the condition of the plant’s trichomes and attempt to pick ripe buds as soon as possible before they turn amber.

Concentrates are one of the most popular items on the market today, with both medical marijuana patients and recreational users seeking for exceptionally high amounts of THC. By definition, plants with more trichomes will have more cannabinoids. As a result, many growers and producers focus particularly on developing cannabis strains with excellent genetics, high trichome counts, and fat buds covered in milky resin heads in order to produce strong concentrates. Cannabis buds like this are perfect for making potent concentrates.

The small, dense buds of the cannabis plant are extracted using a solvent called butane. Cannabinoid compounds can be readily removed from the plant material in this manner. The trichomes on cannabis flowers and leaves can be separated by hand or through various physical and chemical extraction methods.

Separation by way of mechanical action, also known as physical separation, entails breaking and removing trichomes from plant material via a physical operation such on as shaking or pressing. Consider it like shaking a fruit tree to release the ripe fruit. Physical separation techniques include dry sift, kief, and bubble hash. These concentrates are created by shaking cured cannabis through a range of increasingly fine screens in order to eliminate anything other than trichome glands.

What is the difference between trichomes and root hairs?

Trichomes, on the other hand, are formed from a different source than trichomes. They cover various areas of the plant and have distinct functions.

Hair-like roots are secondary and tertiary roots that resemble fine hairs. They absorb moisture and nutrients from the surrounding soil or growth medium in order to nourish the plant. Trichomes, on the other hand, are present on the portions of the plant that are above ground; they’re mostly found on buds and sugar leaves. They produce terpenes and cannabinoids that protect plants against pests and disease. Small bulbous trichome glands might even capture and confine tiny insects by trapping terpenes. Terpenes aid in maintaining proper surface-level humidity so the plant does not dry out.

There are many myths about modern marijuana, and even more regarding the cannabis plant’s anatomy. Because the trichome is the engine of cannabinoid production, it’s only natural to believe that if a marijuana bud has a lot of trichomes, also known as being “frosty,” it must have a lot of THC. This isn’t accurate at all. The number of trichomes on a plant isn’t an indicator of its THC content or taste. The amount of cannabinoids in cannabis is determined by a number of factors including genetics, environment, stressors, diet, and the grower’s overall experience. Cannabis trichomes are responsible for producing the resin inside because it contains cannabinoids. Concentrates are the result of extracting the resin from the trichomes and separating it from the rest of the plant material. These little individuals are what got everything started; take a closer look at your marijuana when you pick up next time. And as previously stated, please use responsibly.