Mangoes are a beloved treat for many because of their refreshing sweetness and hydration each bite provides. But beyond just being delicious, some people consume mangoes to amplify the effects of cannabis. While these fruits hold similar chemicals that exist in marijuana, does it truly elevate one’s high? Learn more about this truth now!

Could mangoes and marijuana be the ultimate combination? Not only is this tropical fruit packed with antioxidants to combat cotton mouth and the munchies, but certain self-professed cannabis aficionados also suggest that it can enhance your high. Could indulging in a succulent mango truly take you on an even more elevated journey of bliss?

The theory goes that mangoes possess special phytochemicals that allow more THC (the principal psychoactive component of cannabis) through the blood–brain barrier. An increased quantity of THC in the brain results in greater receptor activation, which equates to a faster-acting and more powerful experience.

Is it true that a tantalizing natural fruit can amplify the potency of cannabis? Let us find out as we uncover the facts behind one of weed‘s most enduring rumors.

Mango and the Myrcene Terpene

Mango, the succulent Latin binomial Mangifera indica, has delighted taste buds and tantalized senses for centuries. A member of the cashew family, these luscious ovals of goodness originate in South and Southeast Asia–particularly Burma (Myanmar), Bangladesh, and India. Unlike cannabis plants that are dioecious or gender-based with separate male/female trees; mangoes possess both reproductive organs on each tree: they are monoecious.

Having refreshed your memory on botany, let us now discuss phytochemistry. Advocates of mixing mango and weed maintain that the terpenes found in this fruit are accountable for its reputed potency-amplifying effect. If you’ve read about marijuana, then it’s likely you have heard of “terpene” at least once – these volatile aromatic molecules provide cannabis plants their unique smell and flavor profiles. Interestingly enough, mango also consists of such pungent hydrocarbons!

Out of the 30,000+ terpenes existing in nature, there are 150 that can be found in cannabis. Amongst these compounds is a distinctive one known as myrcene which plays an essential role in connecting marijuana with mango – providing both fruity and earthy flavors!

Myrcene is a monoterpene, meaning it contains 10 carbon atoms and has many widespread occurrences in cannabis cultivars. Thus, these plants that are abundant with myrcene can be particularly calming and sedating – which we associate as “indica” effects. Additionally, the presence of this terpene may have an impact on how people perceive certain cannabis varieties’ overall effect. 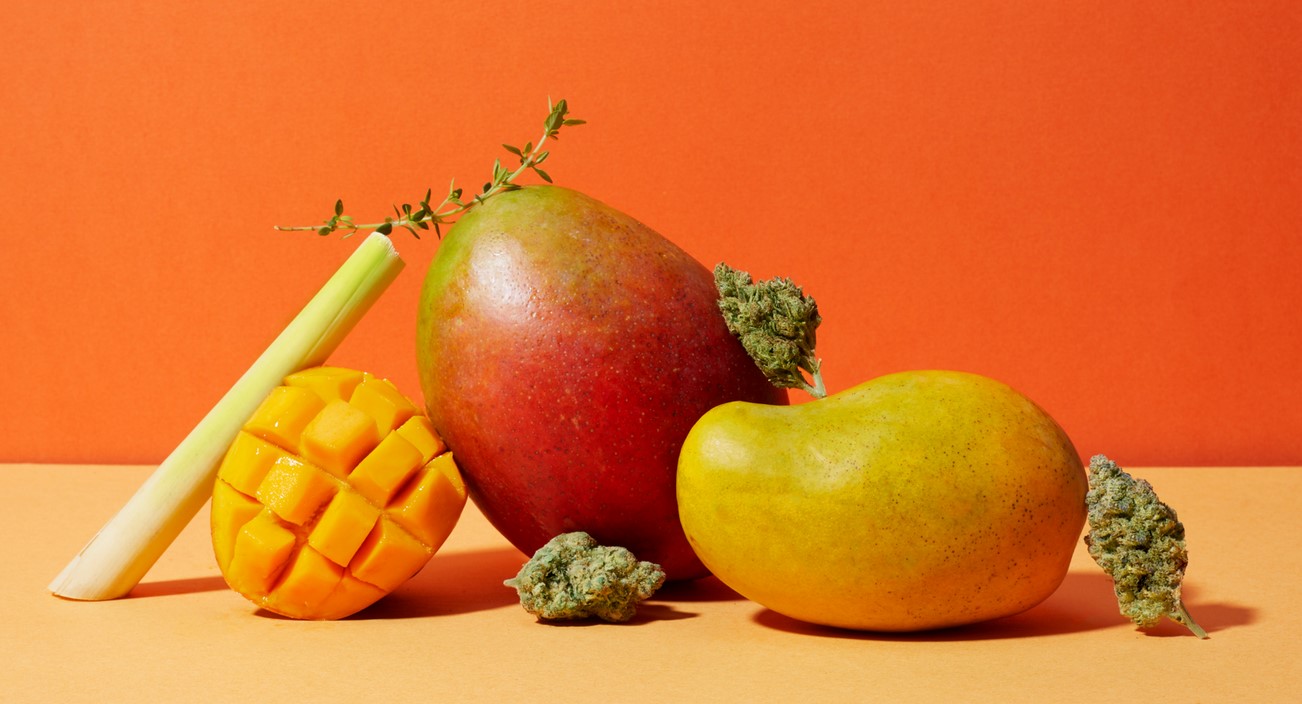 Does Mango Change the Way Weed Works in the Body?

Is it true that mangoes can enhance your cannabis high? Even though there are no studies examining the effects of combining marijuana and mango in humans, we can further explore its links to research on myrcene’s interaction with cannabinoids such as THC.

Researchers have uncovered some remarkable effects of myrcene. Currently, they are studying this molecule to evaluate its possible sedative, anti-convulsant, and anxiolytic properties. Specifically regarding anxiety reduction, myrcene has been found to alter the levels of GABA (the chief inhibitory neurotransmitter) within the central nervous system by stimulating GABA-A receptors – potentially having a beneficial effect on anxiety symptoms.

Cannabinoids get much of the recognition for cannabis’ effects, yet researchers now think that terpenes have a remarkable role in shaping the psychological impacts of certain cultivars. While THC, CBD and other cannabinoids form baseline results, it is terpenes which guide users towards specific emotions. Cannabinoids and terpenes can even collaborate synergistically – an occurrence known as the entourage effect. Ongoing studies are looking to see if myrcene combined with CBD can reduce inflammation levels; additionally they’re searching to determine whether or not THC might magnify a Terpene’s sleeping-inducing qualities

Myrcene’s actions are far more complex than that. Cannabis enthusiasts state that mangos can modify the permeability of the blood-brain barrier. While this may appear outlandish, Frontiers of Nutrition released a paper in 2021 supporting it: Myrcene could enhance cannabinoid influences by decreasing resistance across the blood-brain boundary and thus enabling increased transportation into your brain.

The amount of myrcene in cannabis and mango can have a significant influence on their respective highs, however the presence of this phytochemical may vary. Not only genetics, but also environmental factors impact the concentrations found in these plants. An investigation published by Phytochemistry evaluated 11 different varieties of marijuana to determine its myrcene levels—ranging from 0.04% up to 1.9%. Another study examined 20 types of mangos which had anywhere between 0.09-1.29mg per kg as determined through volatile components analysis within them

So, does eating mango induce a heightened state of consciousness? Let’s decipher this question.

A single cup of mango offers up to 165g of its sweet flavor, containing only a minuscule 0.2mg worth of the terpene myrcene. Even with the most myrcene-rich cannabis available in a typical joint – weighing about 0.3g – you’re looking at 5.7mg per smoke session!

All things considered, one cup of a type of mango which is very low in the terpene myrcene will supply amounts nearly equivalent to that found in a strain with extremely low myrcene. Yet, since most current strains are higher in this particular terpene, consuming even a whole mango won’t have much impact on its phytochemical blend.

Should You Consume Mango Before or After Smoking Weed?

If you’re looking for a very subtle way to change the effects of cannabis, consider eating a mango 30 minutes prior. Though manges are lower in myrcene than cannabis, they still contain enough to create minor changes. Keep in mind that mangos won’t produce substantial physiological alterations; instead save your ripe fruit for after smoking weed as it’s an effective solution against post-munchies and dry mouth.

The Benefits of Eating Mango

Aside from their potential psychotropic effects, mangoes are an incredibly nutritious fruit and well worth eating. Packed with essential vitamins and minerals, the tropical fruit contains:

In addition to these essential nutrients, mangoes are also packed with phytochemicals that can provide a host of benefits for human health, including:

Do Other Foods Enhance the Effects of Cannabis?

Not only cannabis, but several different foods can also activate your endocannabinoid system. Although these may not give you the same level of high as do marijuana-infused dishes, introducing them into your meals may still enhance the effects of smoking weed in a positive manner. If this intrigues you, why not try creating something special with one or more of these terpene and cannabinoid-containing items? Some ideas to get started include:

Mango and Weed: Don’t Get Your Hopes Too High

Could eating a plethora of mangoes increase the intensity of your high? Perhaps, but beware that it may not end up being worth it! Eating large amounts of mango might theoretically result in an even stronger stoned feeling. However, gorging on this fruit could also have unpleasant consequences for your digestive system.

Despite the mango enthusiast’s attempts to convince us, it is quite clear that even in the most myrcene-rich varieties of mangoes, their levels are too low to have any effect on your marijuana experience. Nevertheless, having some after you’ve smoked remains one of the best post-session snacks!